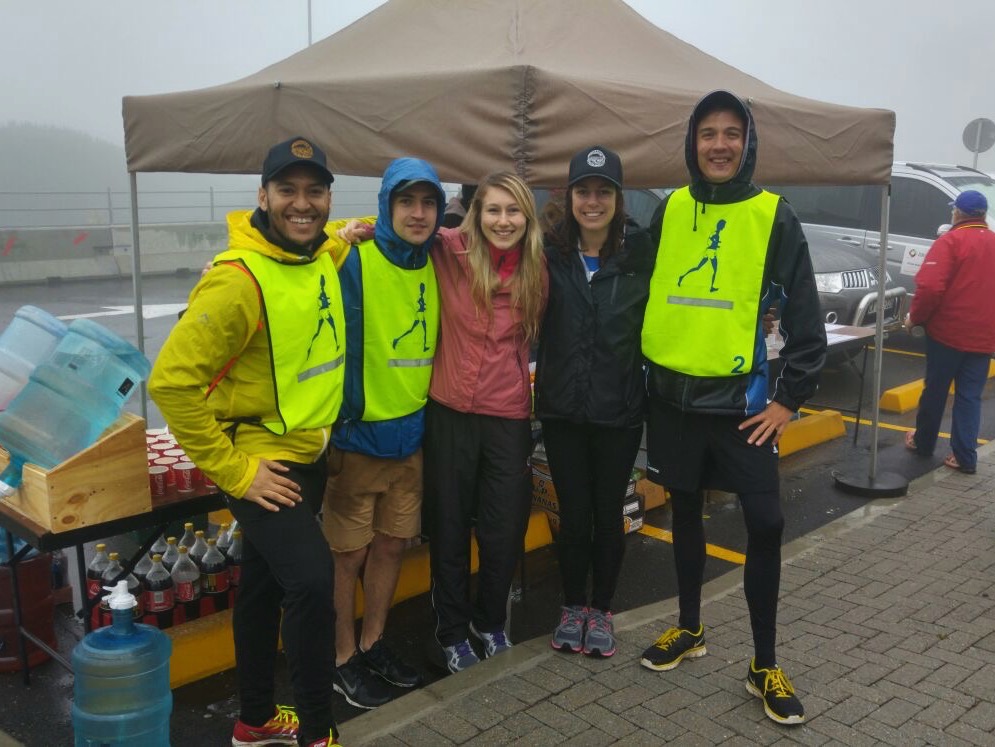 The 2nd edition of the Ultra-trail Cape Town went down on the 3rd of October with ± 550 runners across the 100km, 65km and 20km races getting a view of the best that Cape Town has to offer. 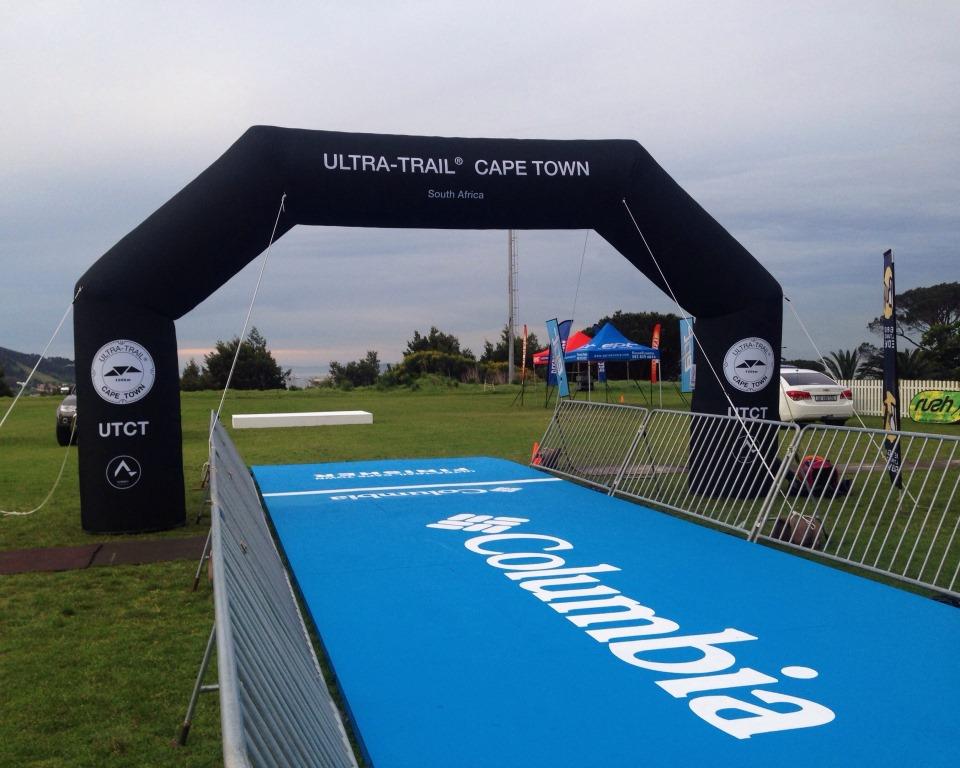 The Finish Line at the Ultra-trail Cape Town

I signed up for the Kloof Nek Aid Station, with my friend Tammy (aka TVR). It was the only station which would see runners from all races pass through it. I’m a bit injured at the moment and was unable to run, so it was a great opportunity to get involved with a race that is positioning itself on a similar level to the Transvulcania and Ultra-Trail du Mont-Blanc.

But, I didn’t just do it for the gees and awesome race vibe. The truth is that I did it for the trucker cap…

The problem is that you can’t wear race merch that you didn’t earn – it just ain’t right.

Then it hit me…I’ll volunteer!

The next thing I knew we were setting up at 4:30am on race day. 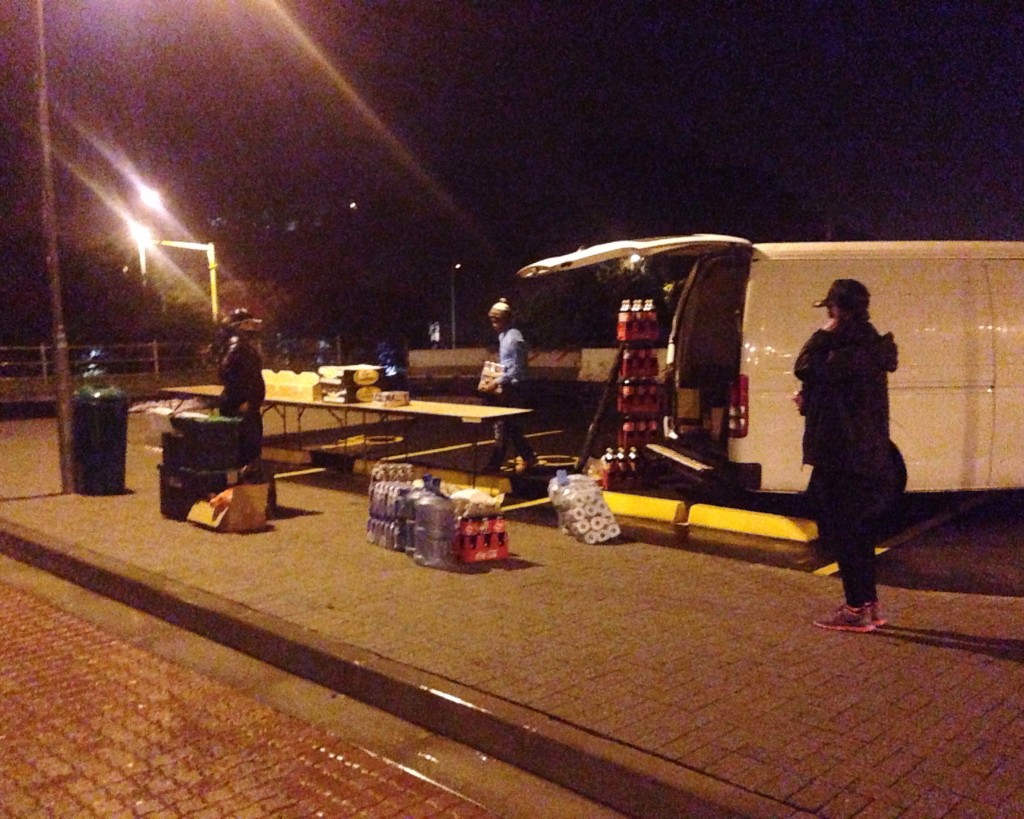 It was rough waking up, but TVR and I weren’t the only dedicated trail fans out there as the rest of our team were also there bright and early to set up in the cold and rain. 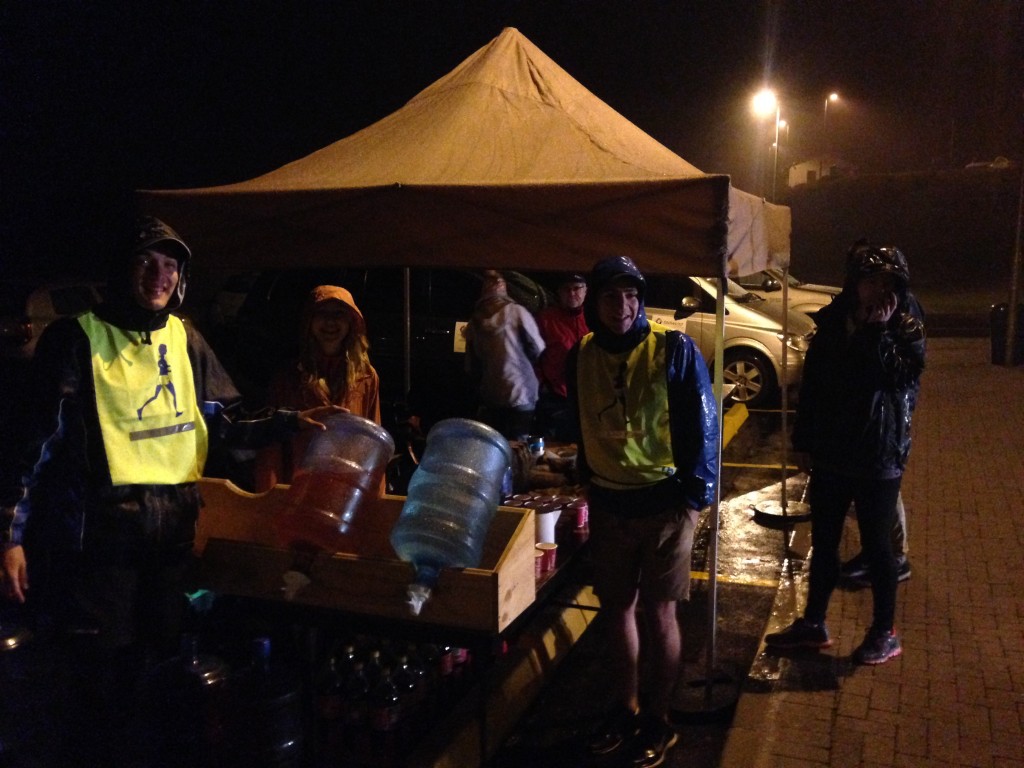 By 5:30am we were ready and made our way to our marshal points where we would be directing runners towards the Aid Station and then towards Kloof Corner and up Table Mountain. 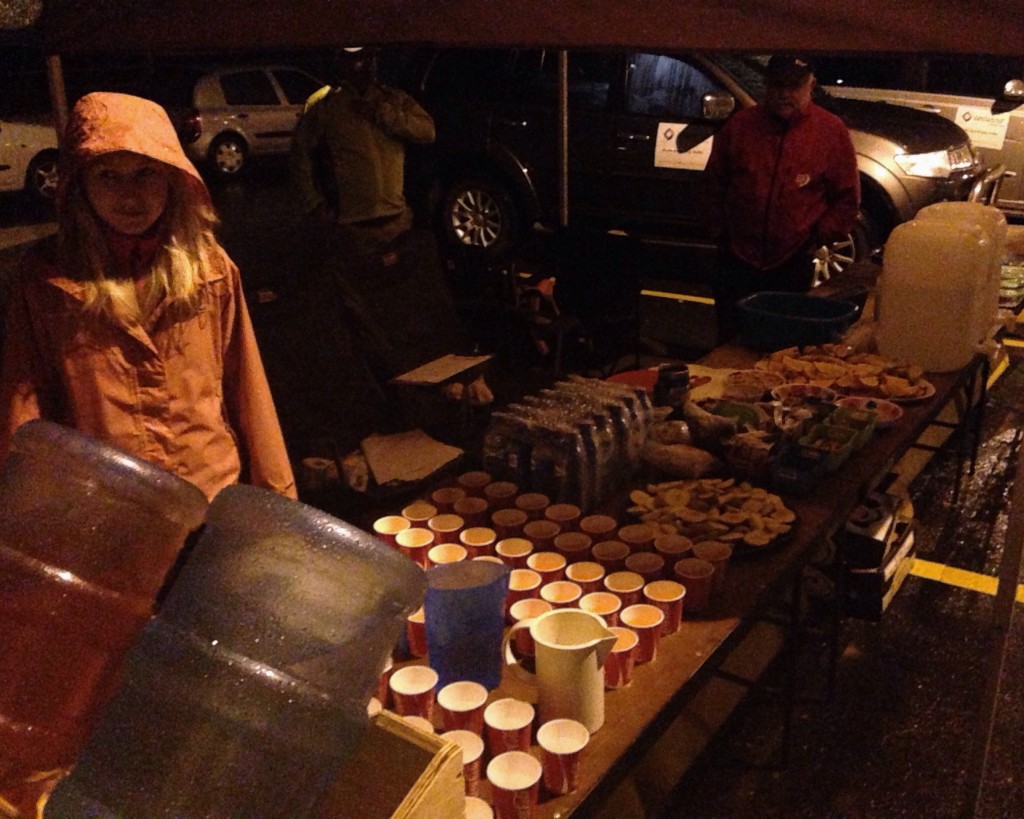 I started at the foot of Lion’s Head (at the 10km mark) and pointed runners to the Aid Station about 600m further down.

Armed with a headlamp and some snacks, I awaited the first of the Elite runners from the 100km and 65km races. Visibility was poor in the dark with the mist and rain not making it any easier to see ahead along the jeep track.

It was quiet enough that you could hear the crunching of the gravel under the feet of hikers as they passed me. I had to rely on sound to detect the runners in the dark and, just after 6am, I heard the rhythmic strikes of runners approaching. The light from their headlamps confirmed this as they appeared though the mist. 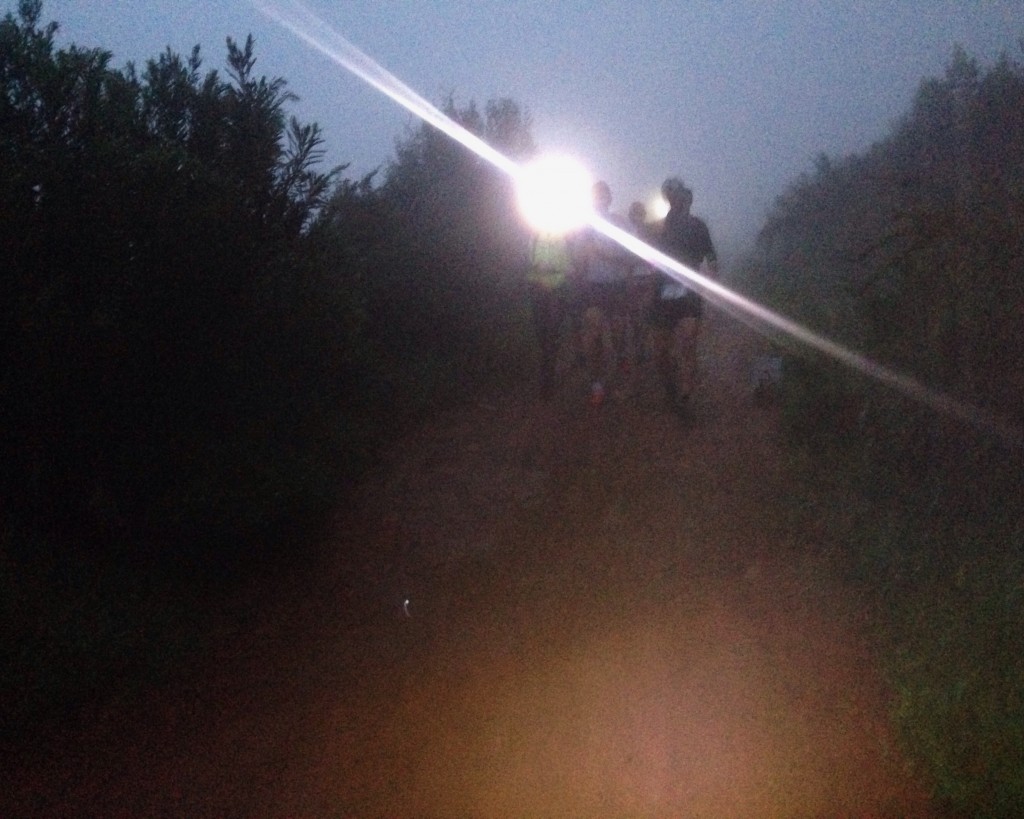 This was my first encounter with Elites in full on race mode and they were just cruising.

The first group of about 10 runners were chatting away and from the outside it looked as if they were out on a group run with mates. Among those front runners were local stars Gift Kehele, Christiaan Greyling and AJ Calitz. They were followed closely by a few more packs of runners which included the likes of Kerry-Ann Marshall, Landie Greyling and Chantal Nienaber. 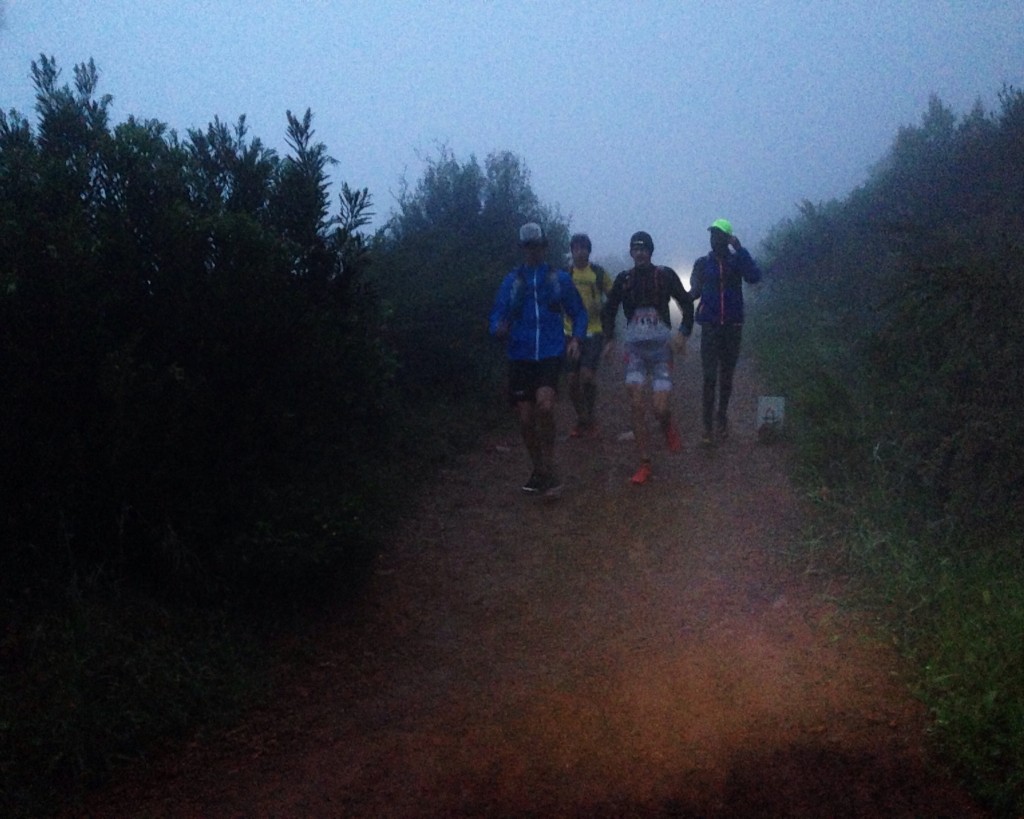 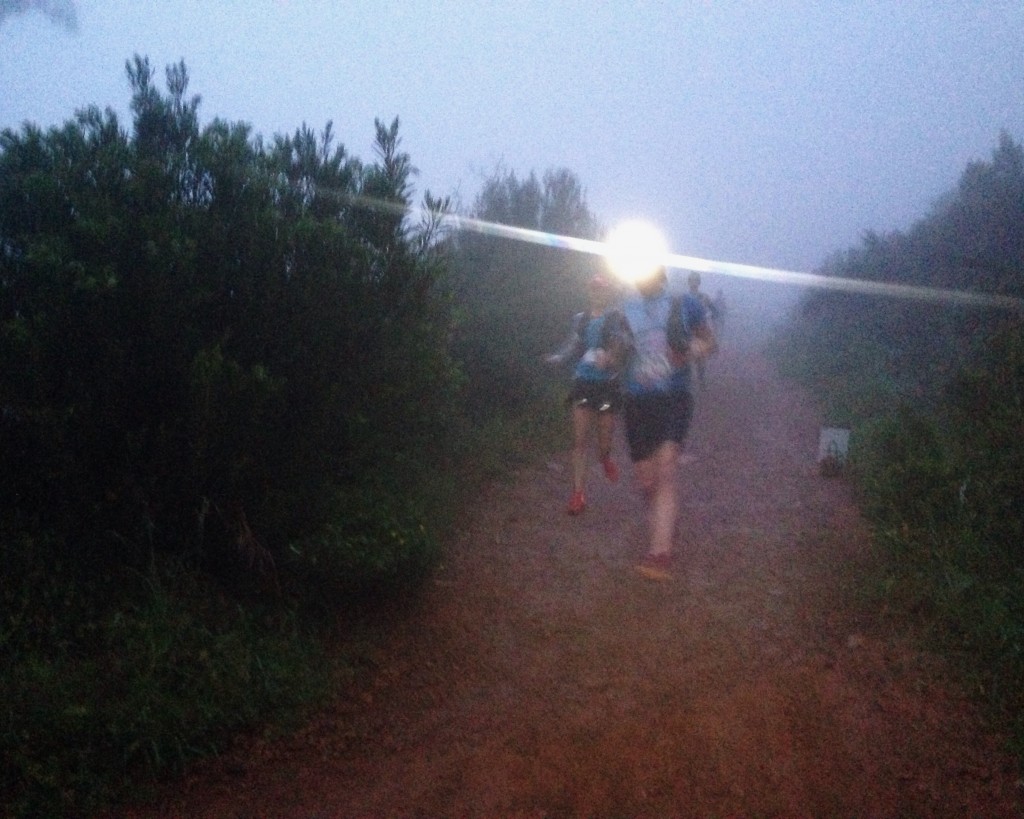 Only after those first few runners had passed did I realize just how fast they were going. It took about an hour before all the runners on the 100km and 65km races came through before I made my way back to the Aid Station to rotate marshal points.

The Kloof Nek Aid Station was the first along the course, so there wasn’t really much chance of runners retiring or really needing to stop. However, for those brief moments there were some interesting observations recounted by the rest of the Aid Station team – especially about those in the leading pack.

A few Elites carried on straight through, there was one shoe change and a few hydration pack top-ups of Powerade and Tailwind (who were actually sponsoring our Aid Station). The toughest job of the day was trying to capture the athlete numbers – I didn’t envy TVR and Jana. 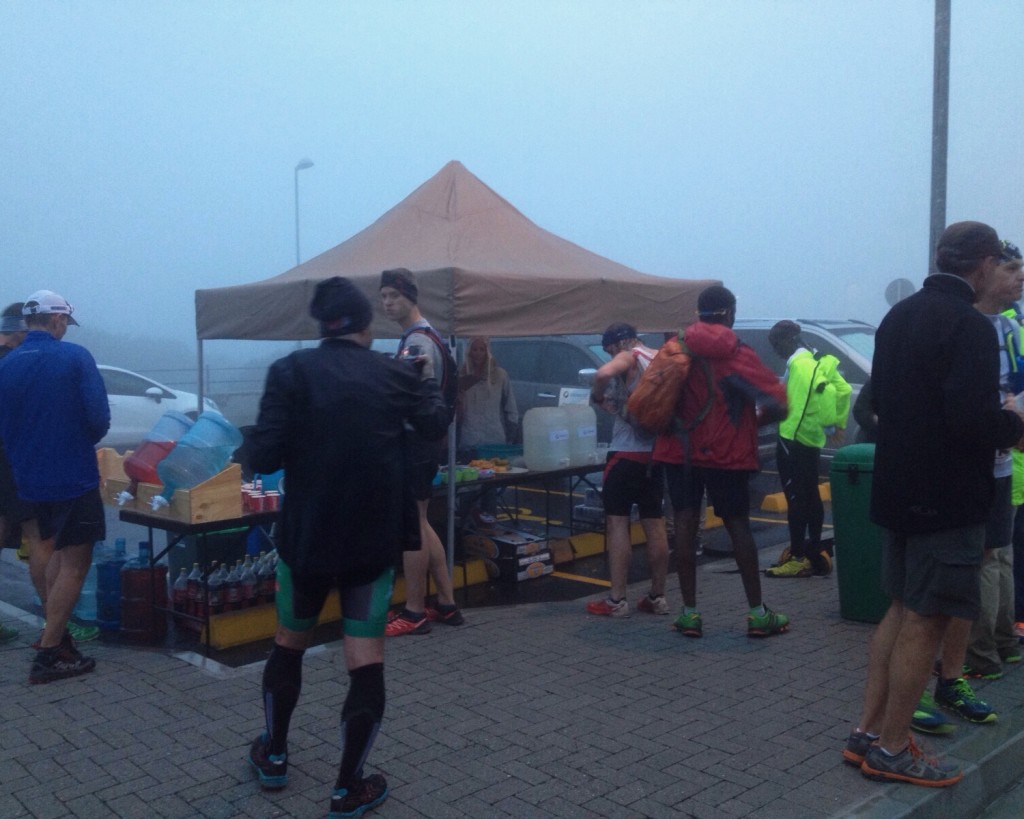 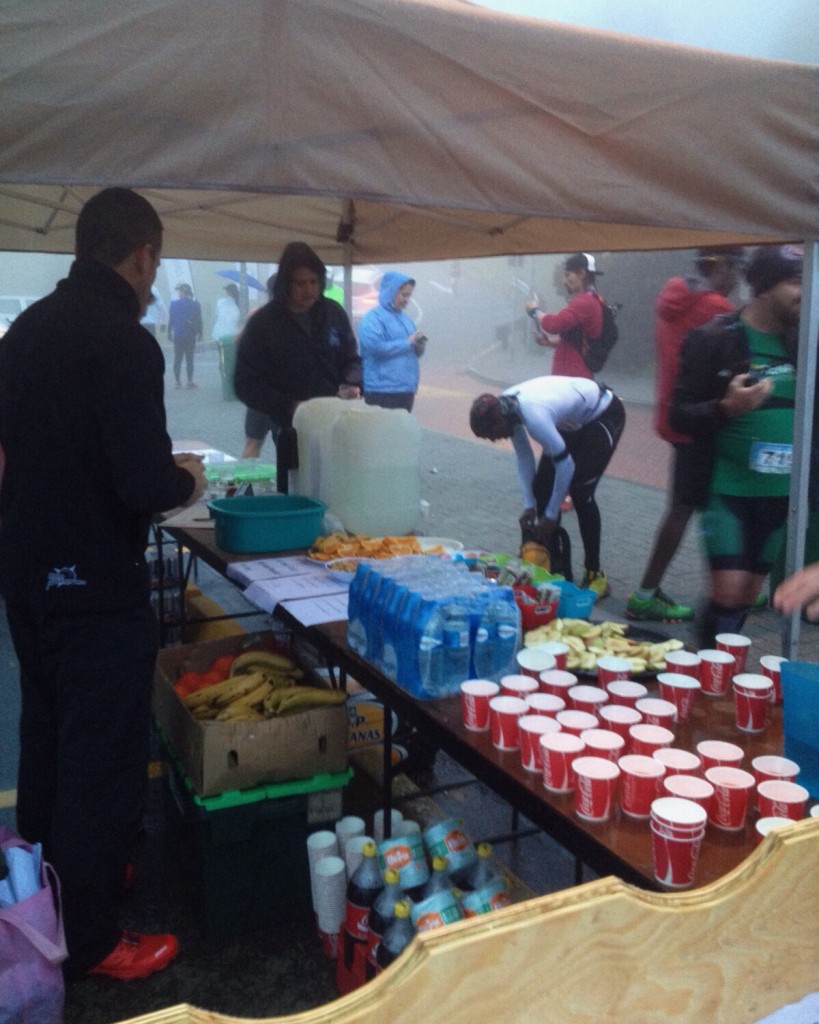 With the 20km runners expected about an hour after the 65km and 100km sweepers, the team grabbed something to eat and topped up the food and drinks at the table. We then made our way to our marshal points and awaited the first runners.

The sun had risen now and visibility was much better. However, it was still misty and rain was steadily coming down.

I was now across the way from the parking lot at the bottom of Tafelberg Road where I would be directing runners up the steps and through the trees towards Kloof Corner. 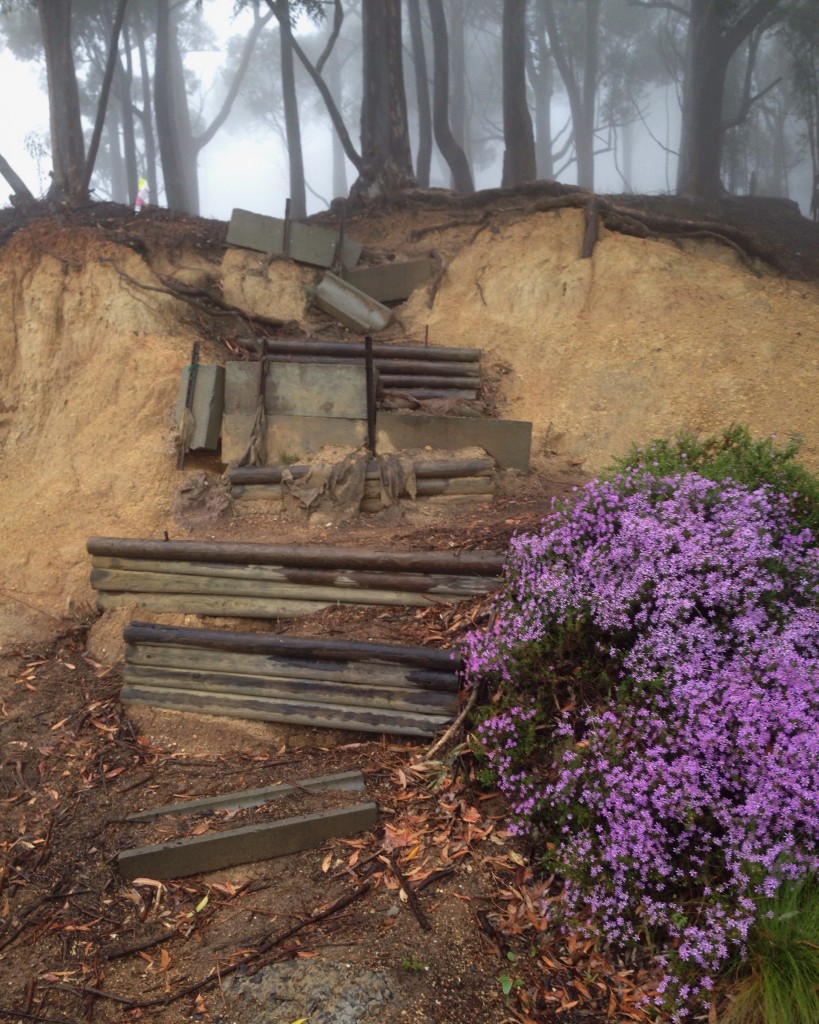 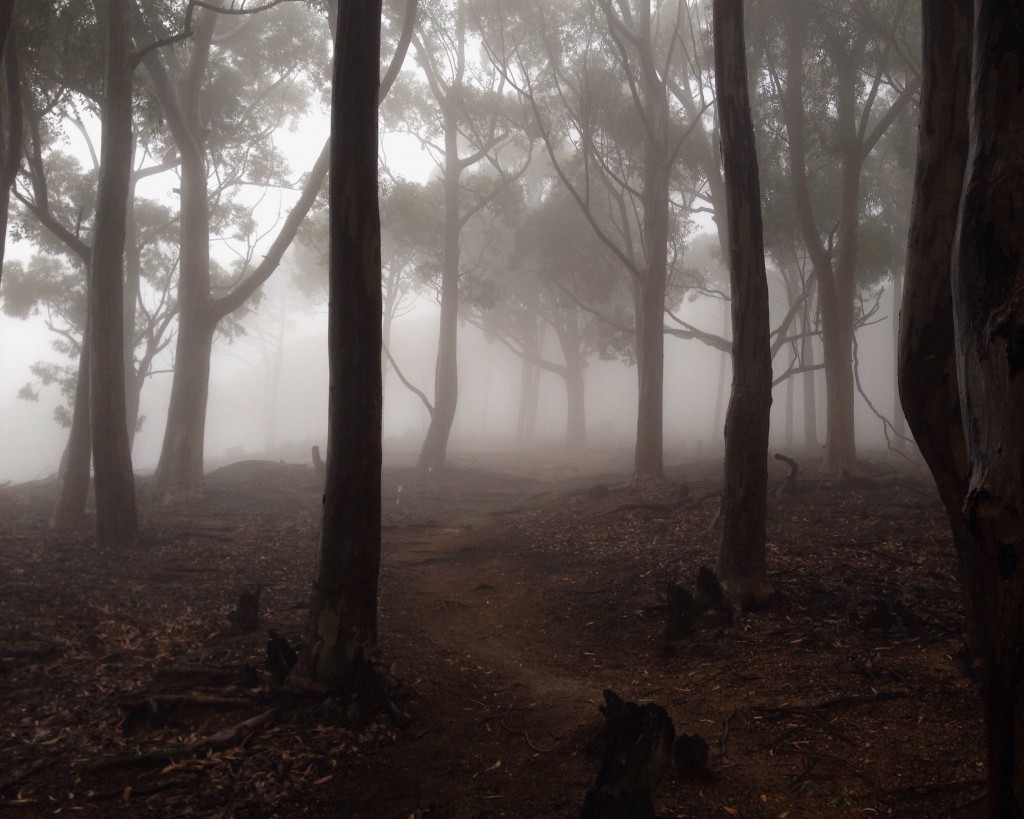 and through the trees

There was a great vibe in the 20km race with hilarious chirps, big smiles and a really great gees even among the first-time trail runners. It made standing out there in the cold and rain entertaining. 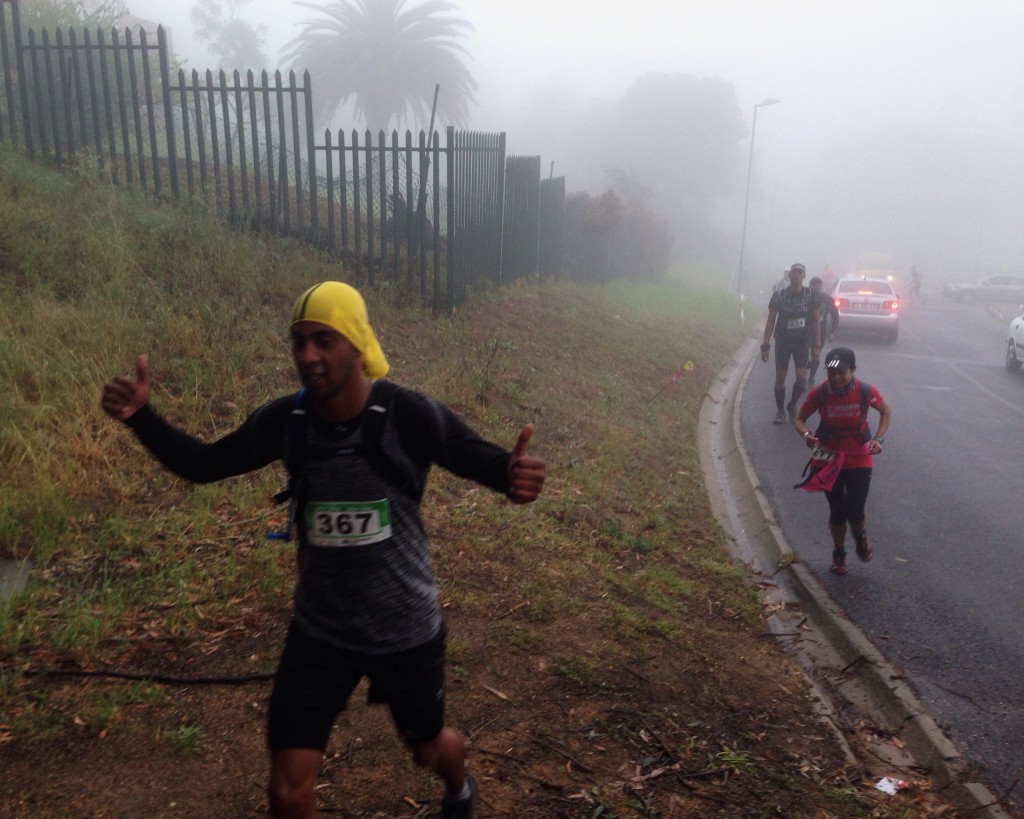 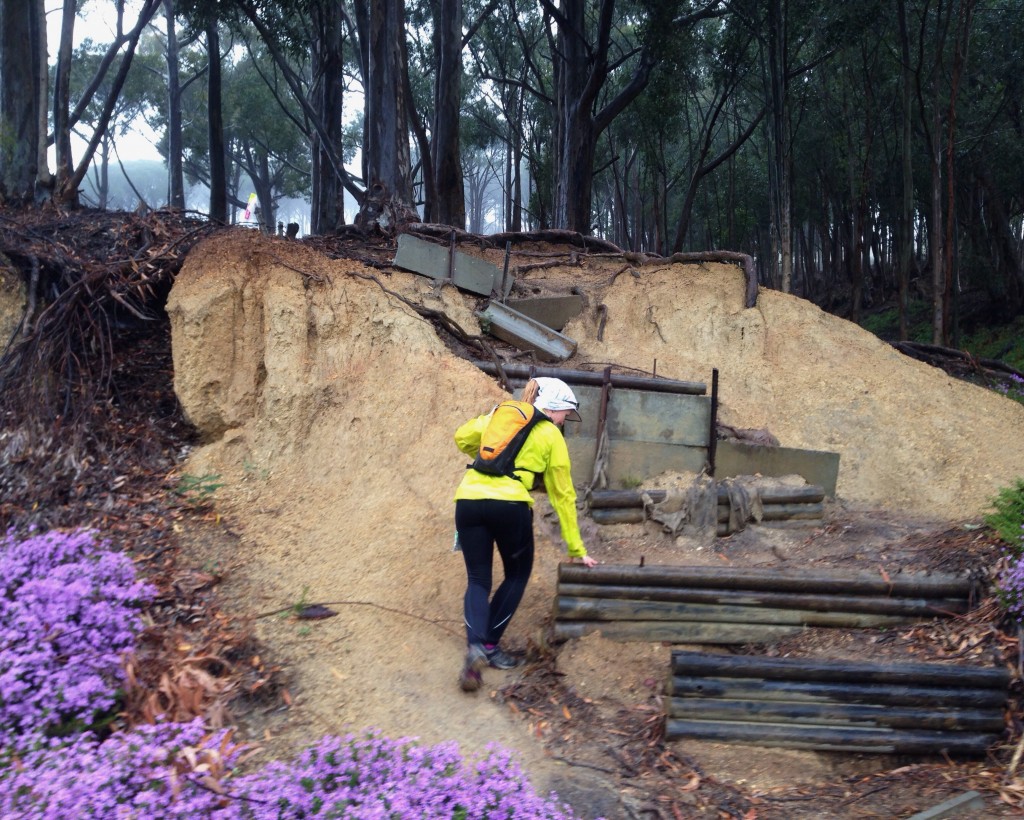 With 11kms under their belts, those steps were rough and each time I motioned towards them runners either laughed in disbelief or looked at me with that “are you serious?” face.

The last runners came through at about 9:30am and by 10:30am our day was done. Some of the other Aid Stations would be out there till later that evening – so we were lucky to get out of the cold that early.

It was pretty fun volunteering and is definitely something all runners should do at least once. A big shout out to the hard working Kloof Nek Aid Station team members and to the Tailwind team for providing some much needed help and kickass music 🙂 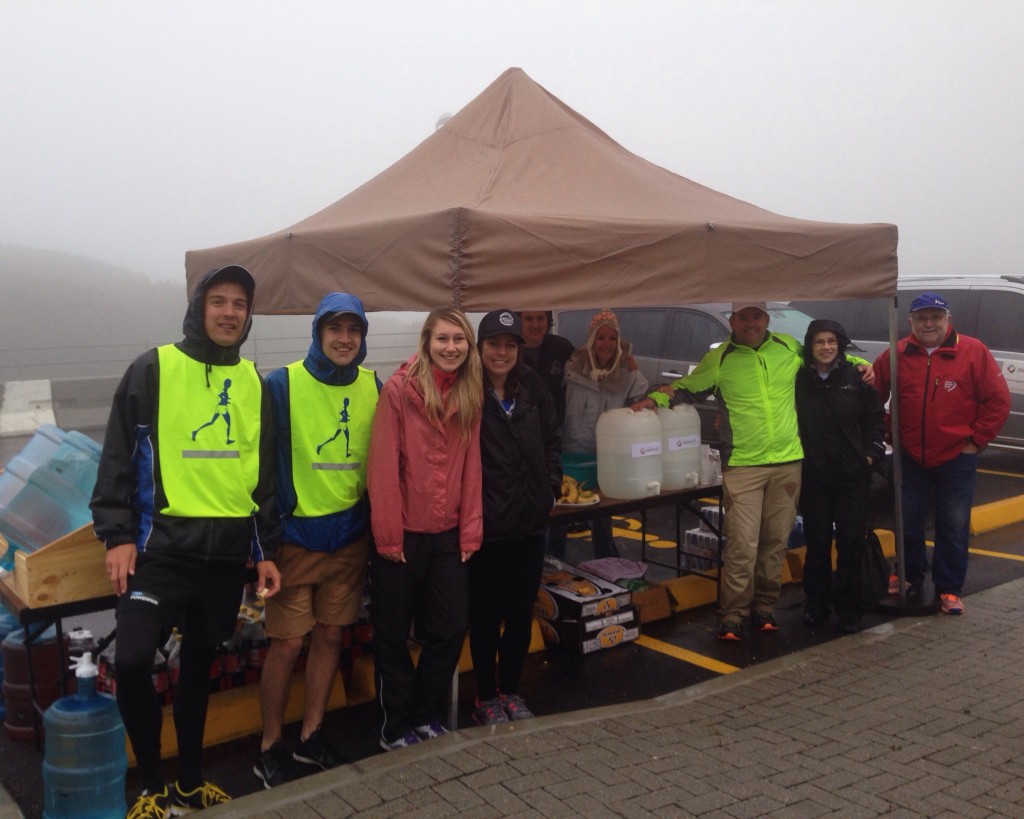 A warm shower, dry clothes and a long sleep was just what I needed when I got home.

And that trucker cap was pretty darn cool too 🙂

Were you a part of the Ultra-trail Cape Town or have you been a marshal at a race before? Feel free to share your comments below.

Thanks to TVR, Simon, Mihali and Jana for the pics 🙂