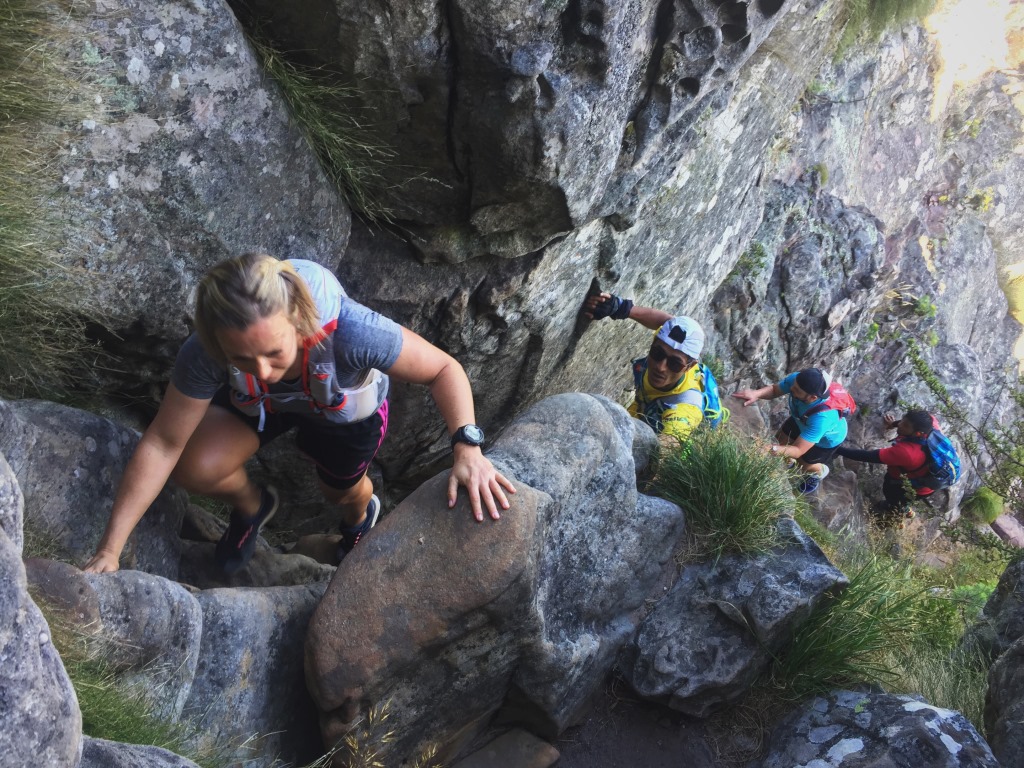 India to Diagonal: Inspiration in the Mountains

Taahir pointed out the Diagonal route when we were doing India Venster. From above Kloof Corner you can trace the zigzagged path down to the Pipe Track. A few weeks ago, Tammy and I explored the route as an option to descend the back Table and I thoroughly enjoyed it – barring the ankle-breaking Pipe Track on your way to the Kloof Nek car park 🙂

With a few weeks left to Ultra-trail Cape Town, I decided that a long run/hike linking up India Venster and returning via Diagonal would be fun. I managed to lure a few peeps to join me with the promise of exploring a cave in the Valley of the Red Gods.

The early morning mission started at the Lower Cable Station using the direct route to India Venster. It’s a challenging start with zero warm-up as you head straight upwards. A short break at the start of the India Venster route is always a nice place for a sip of water before you continue the climb.

It turns out that it was everyone’s first time up India Venster which is always special as there’s just so much to see while you’re up there. 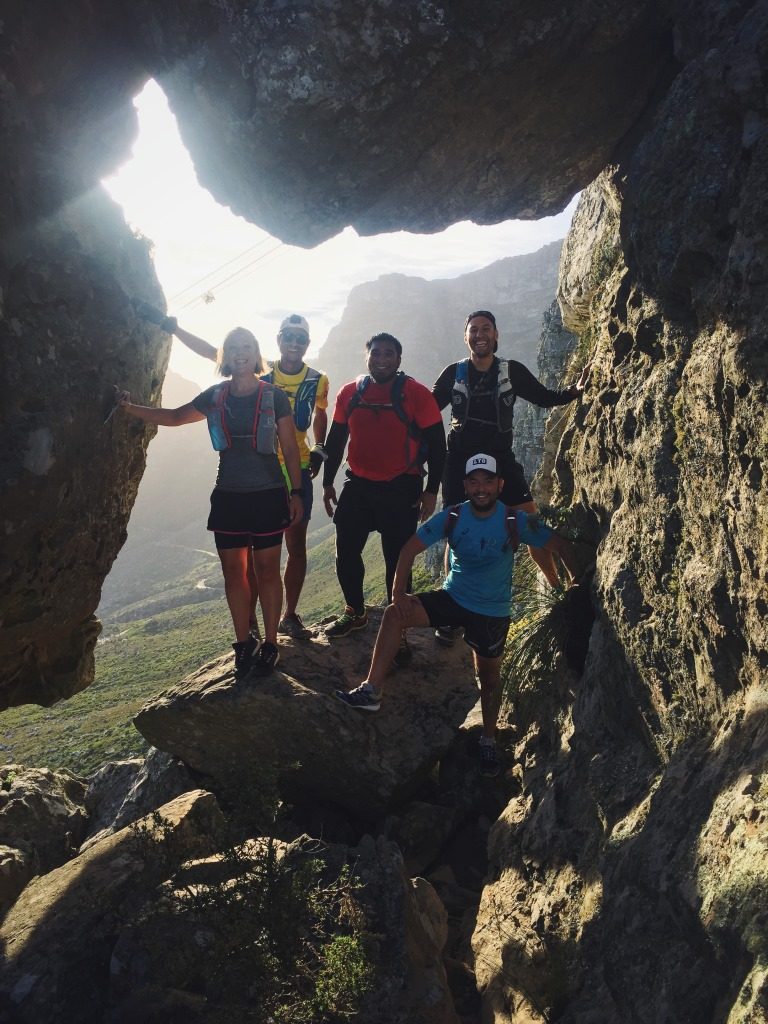 Visiting the Venster (from left to right): Liesbet, Mubeen, Abu-bakr, Fawaaz and me 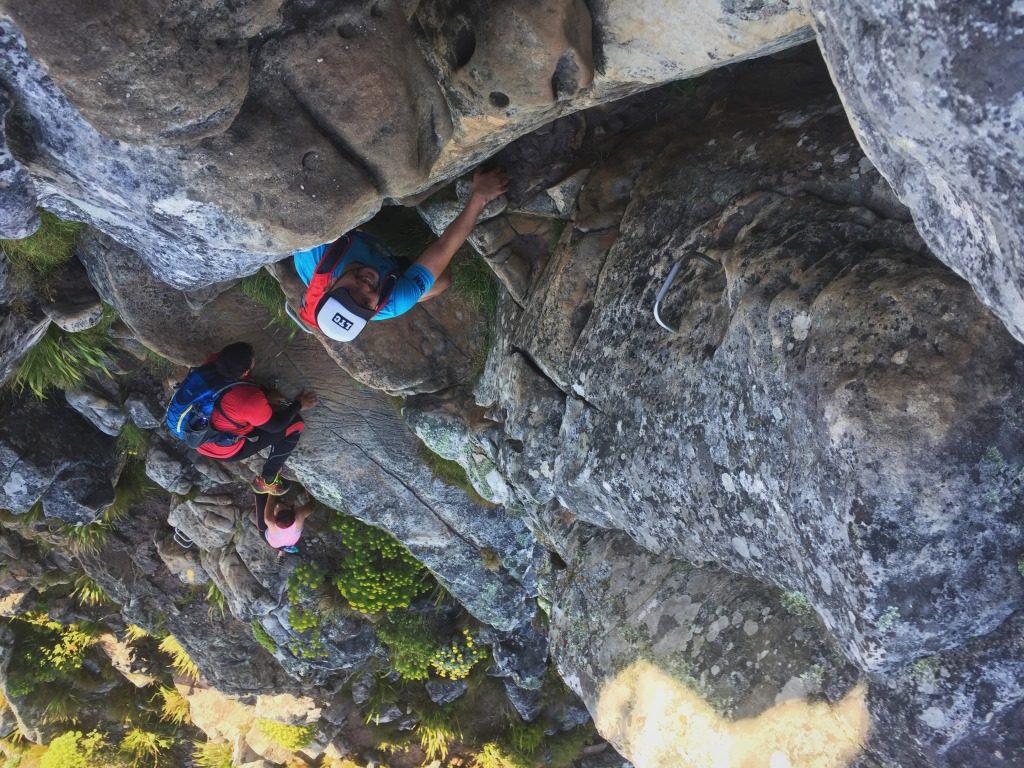 Fawaaz and Abu-bakr scrambling and loving it

We made it to the top and then followed the path towards Echo Valley and Kasteelspoort. The climbs en route really light the fire in my quads and it’s not long before the huffing and puffing starts 🙂  Luckily the banter along the way was top notch. Liesbet distracted us with her Patagonia bike-packing plans and her research into the lightest most versatile equipment that goes into a trip of such epic proportions. It’s hard not to be inspired by people who share that love for the outdoors and adventure. I can see myself attempting a similar trip – I just need to up my mountain bike skills from my current level (aka completely KAK) to something where I’m not likely to kill myself lol 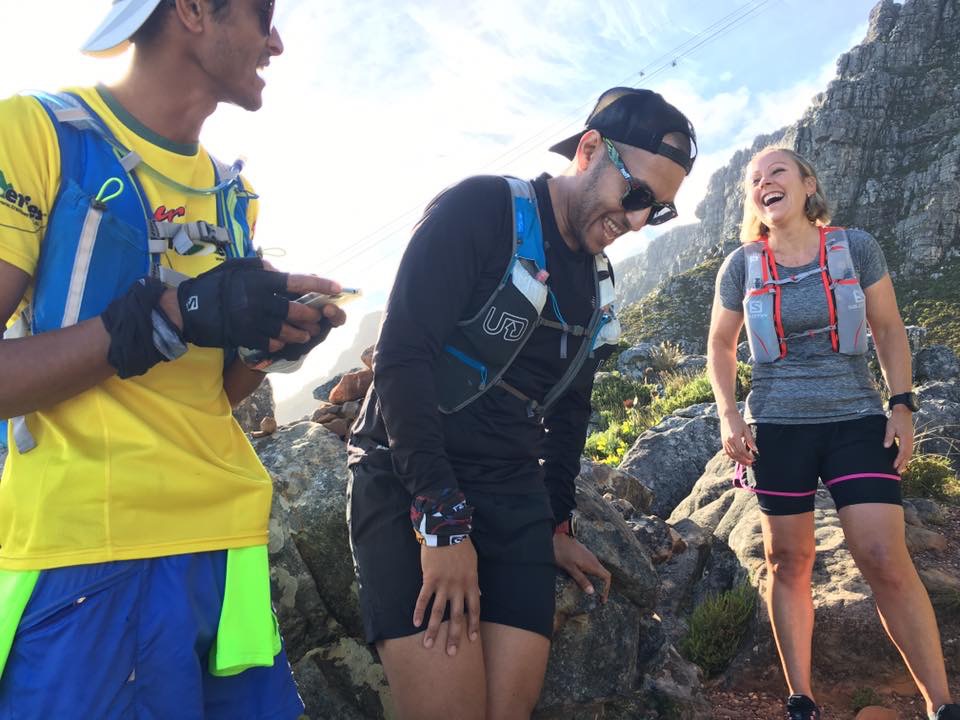 We stopped to fill our water reserves at the grotto before heading on to the Old Cable Way for some sightseeing. 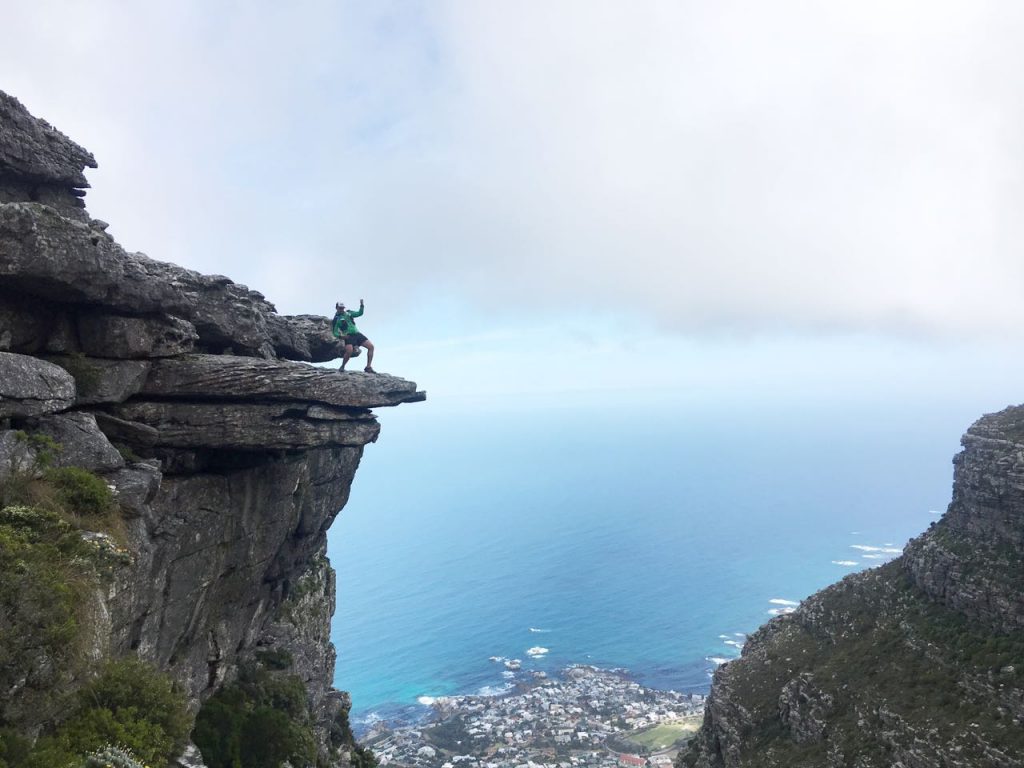 We backtracked a little to the start of the Diagonal route and that’s when Mubeen revealed that he was actually training for the UTCT 100km. Holy shit!

I was thinking that my 65km attempt was a feat not attempted by mere mortals, yet Mubeen was actually there to cut the head off the beast itself.

What’s more is that he was doing it for more than just personal gain. He was part of the fundraising campaign called Pledge A Kay where 16 entrants were putting skin in the game and sweating it out across the 35km, 65km and 100km events to raise funds for the Red Cross Children’s Hospital. His motivation to start the campaign was purely to give back to an institution which he himself had benefited from as a young child with his battle with Hodgkin lymphoma.

Here I was listening to this dude casually talk about the stresses of fund raising and how he’s been fitting in the necessary training for the 100km event all while he was hopping down the steep descents of Diagonal like they were just short steps. Truly remarkable.

There is no faking it in the mountains. I always say that it’s a mirror reflecting exactly what’s going on inside you at the time and Mubeen was calm and super focused. This year I’ve been extremely fortunate to have met such extraordinary human beings all connected and drawn to the mountains. 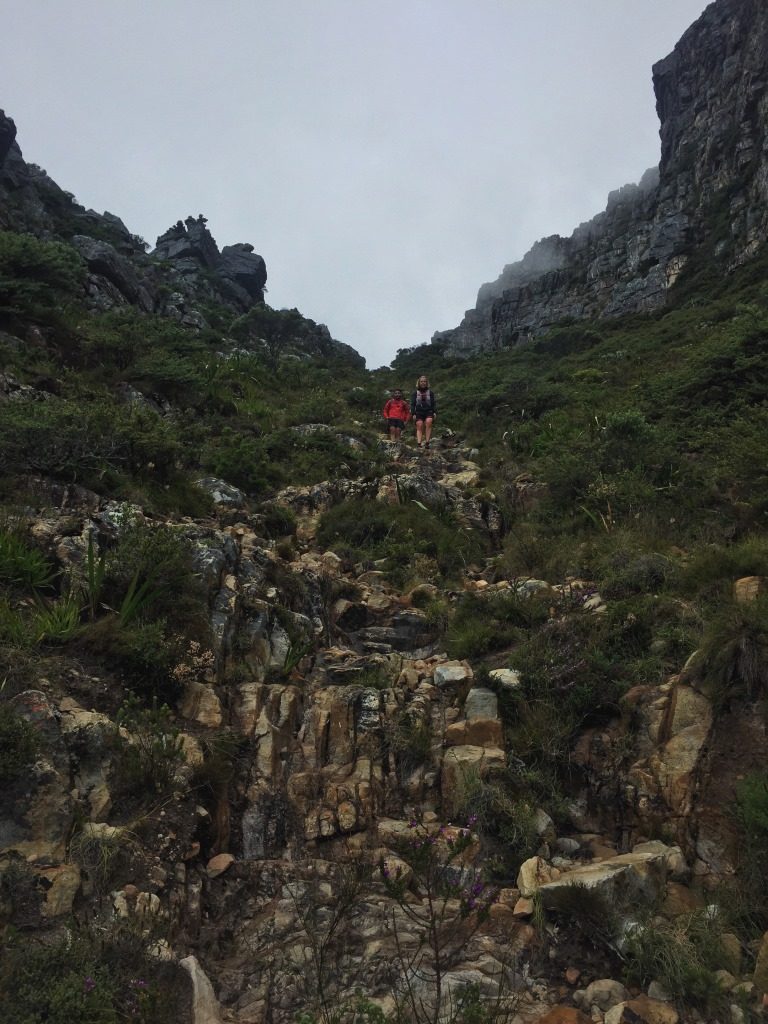 My favourite part of the Diagonal route

We made it down Diagonal and after a short (and tricky) run along the Pipe Track, we arrived back at the car. All safe except for the tumble that Liesbet took which she just laughed off and continued motoring along – tough as nails that one! 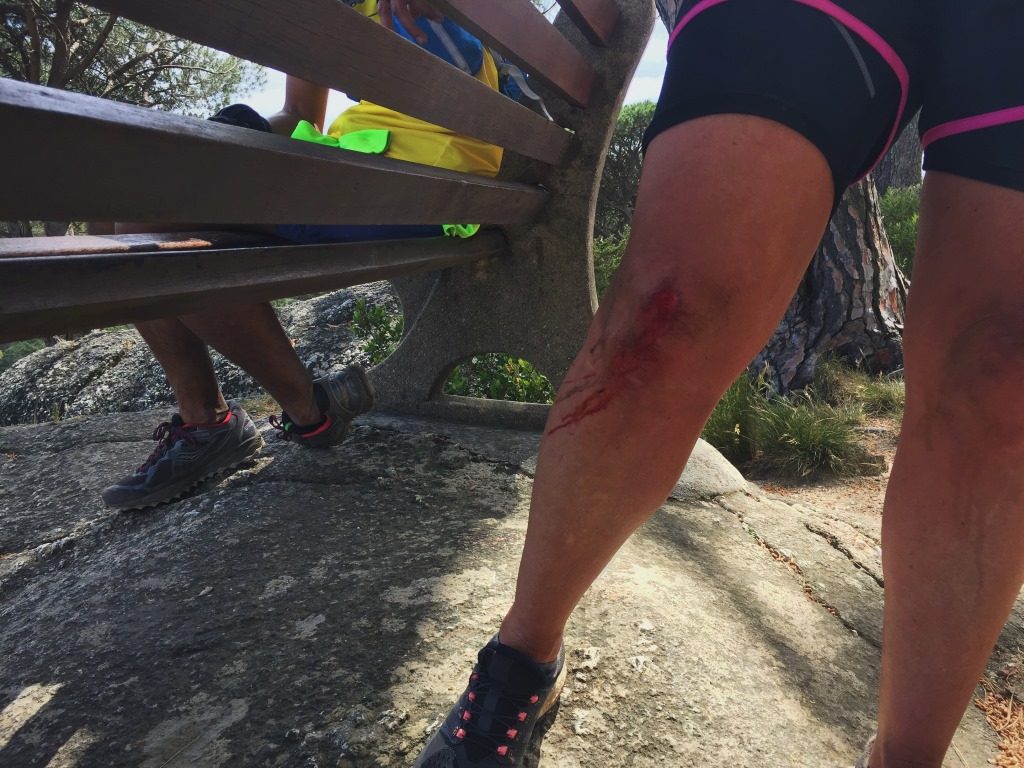