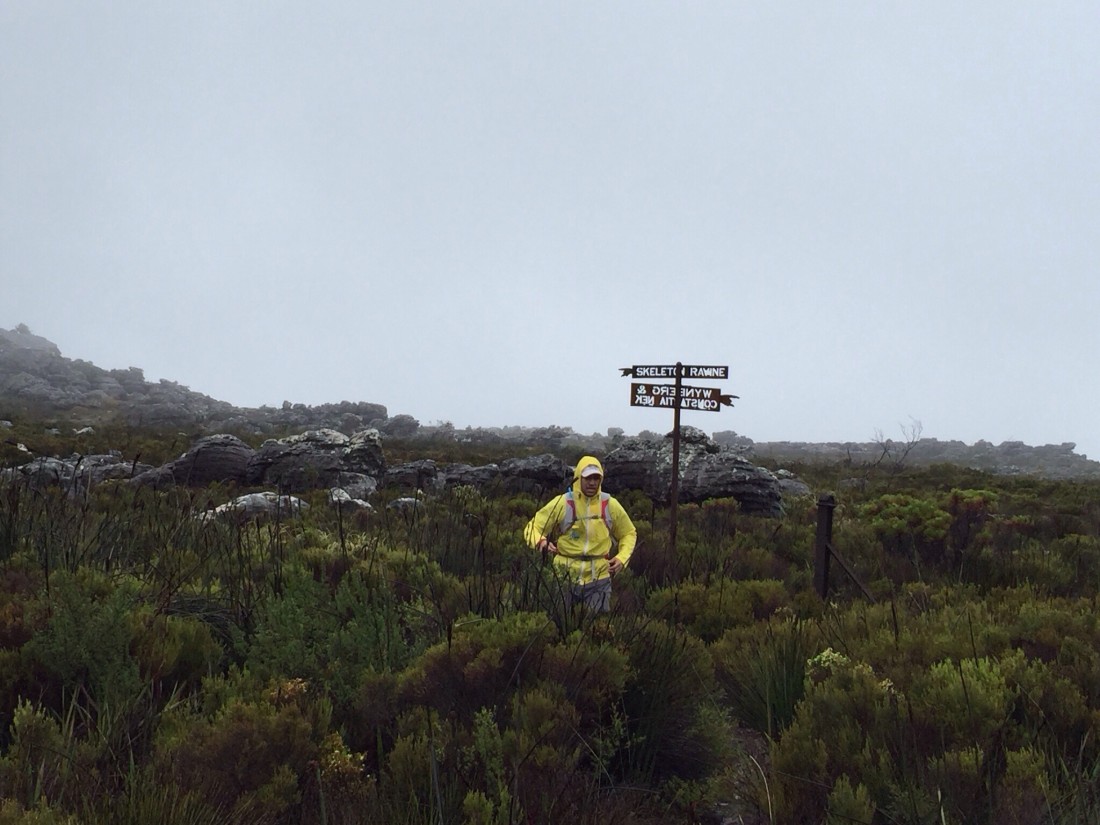 On February 14th, I joined some trail running mates on a run from the Constantia Nek parking up to the Dams on Table Mountain. It is quite an iconic route here in Cape Town especially because of its ease of access and the far-stretching scenic views. 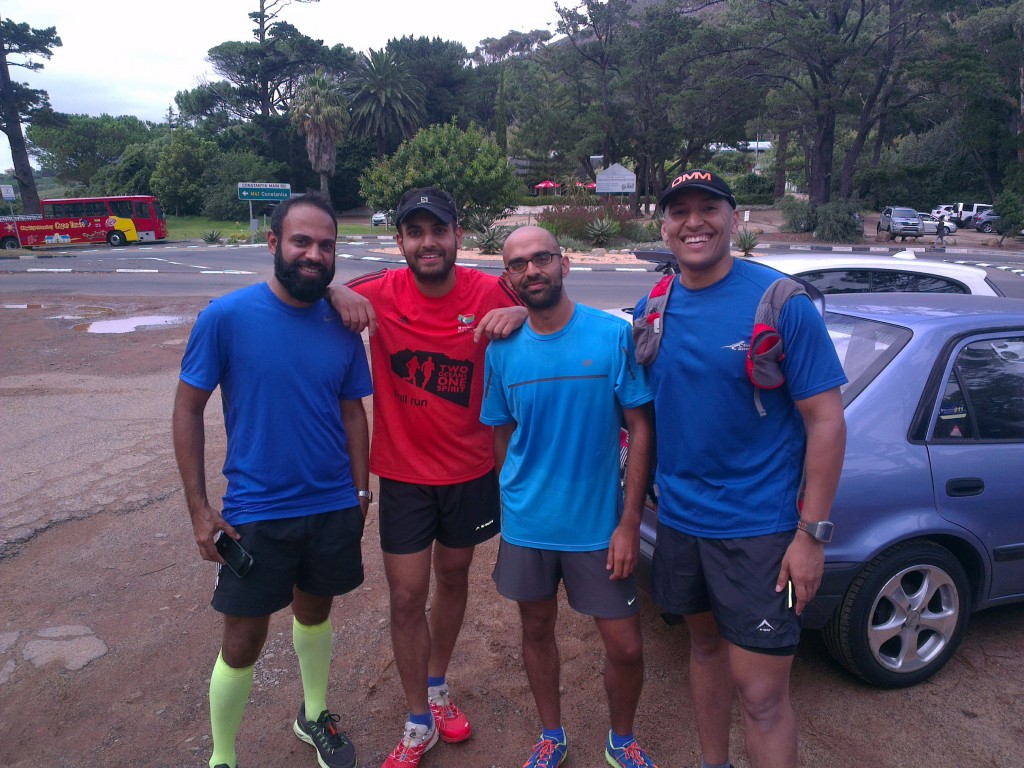 The lads keeping it sexy with a run on Valentine’s Day (from left to right: Imraan, Perwes, Mo & Me)

I’ve been itching to head back up there and finally put an end to the FOMO-induced guilt trips that Aanikah’s been putting me on. Some quality bonding time on a wintery Cape morning was on the menu as we headed out for a run.

Starting from the car park at the Constantia Nek circle, we headed up to the SANParks sign and the start of the jeep track. About 15m from the start, there is a single track path (with steps) that heads up to join the jeep track later up. You can either follow the jeep track as it spirals up to the top, or (like us) use this path as a bit of a shortcut and skip a km or two. 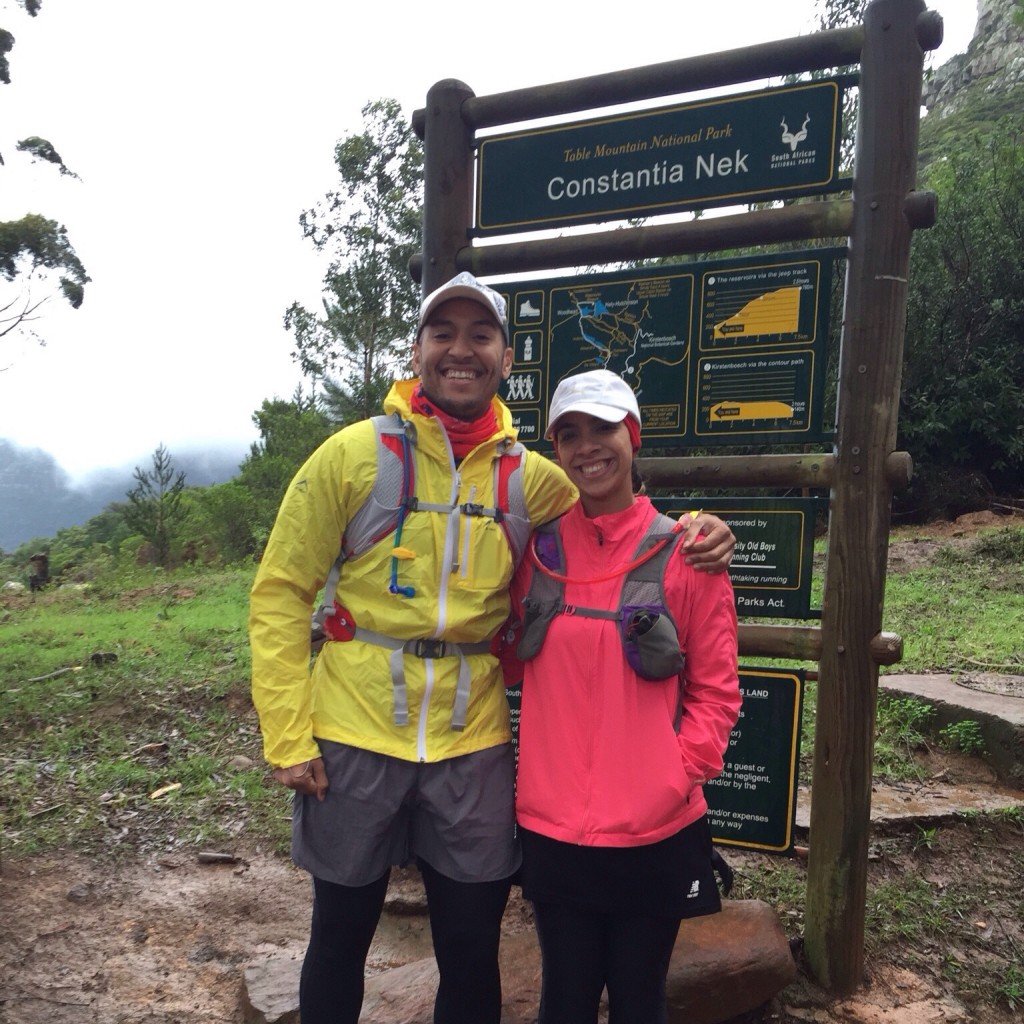 Be warned, the shortcut is steep and provides a nice quad-pumping warmup. 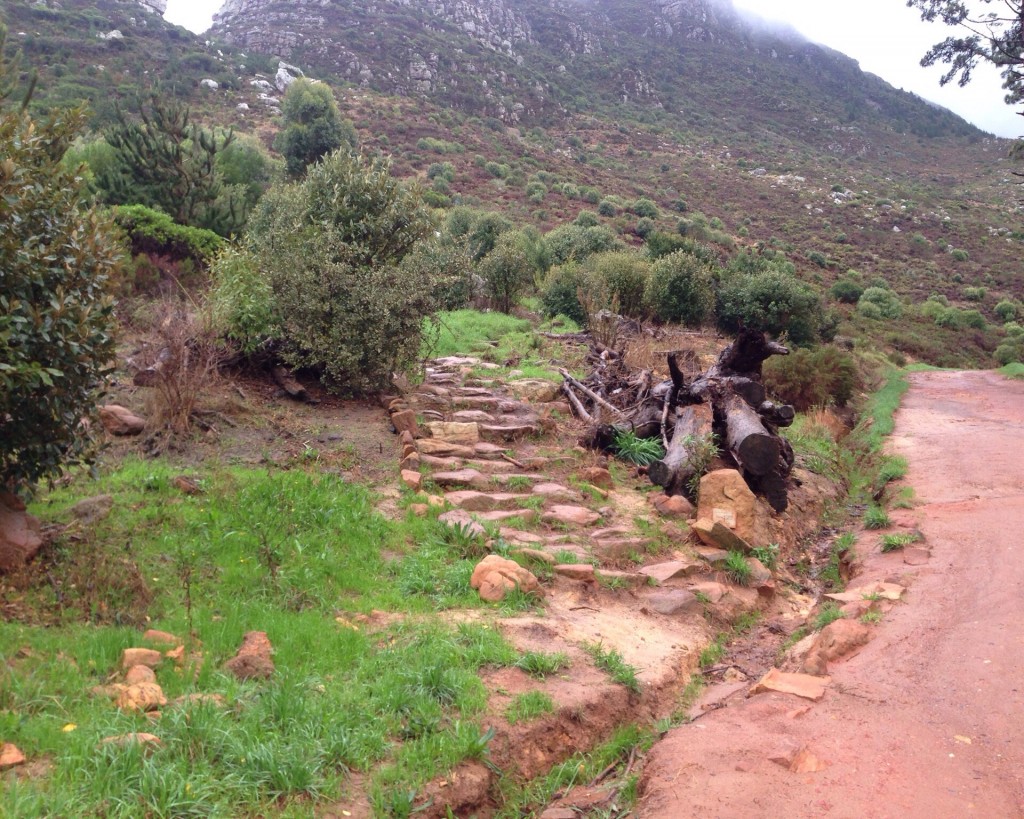 After a few hundred metres of climbing, you will re-join the jeep track. Make sure that you keep following the jeep track to the right as you continue towards the top. 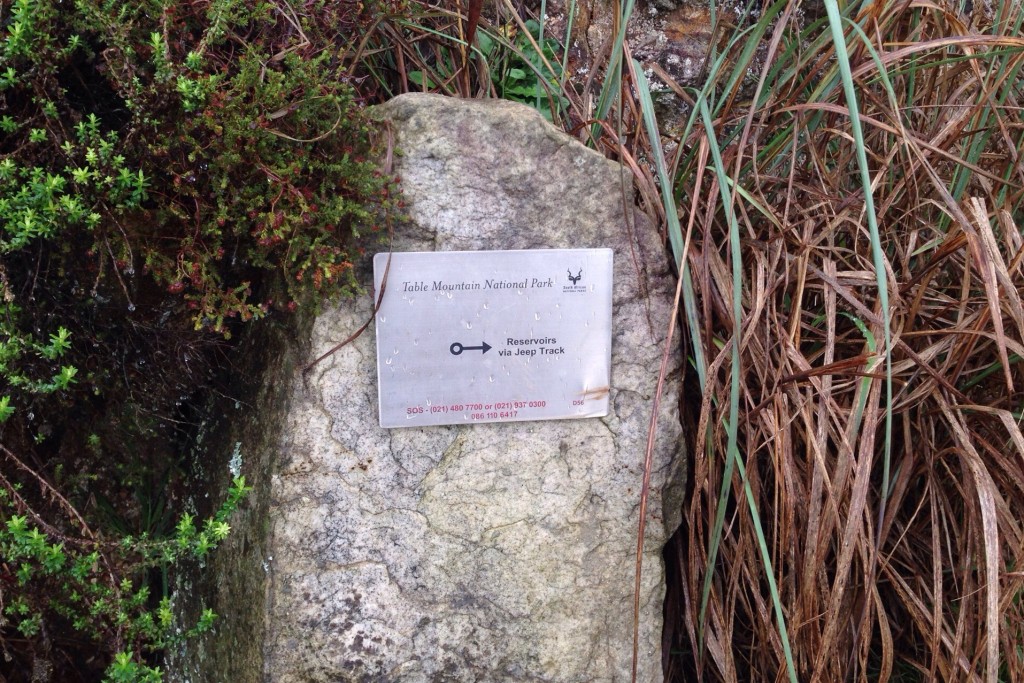 Most of the climb is on paved jeep track, however it is rather steep. The total climb is roughly 2kms, but I found it to be tougher than summiting Lions Head. Once you reach the small bridge, the climb is basically over and it all flattens out. 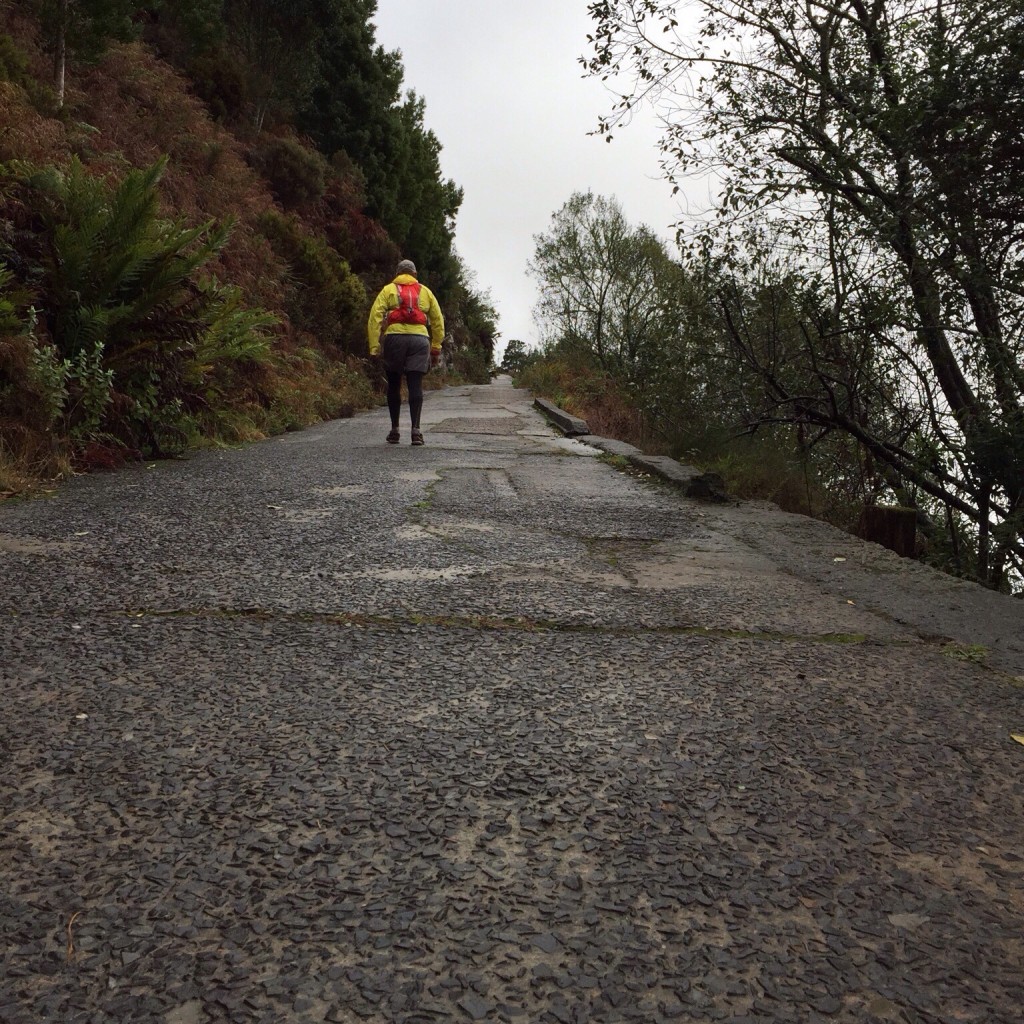 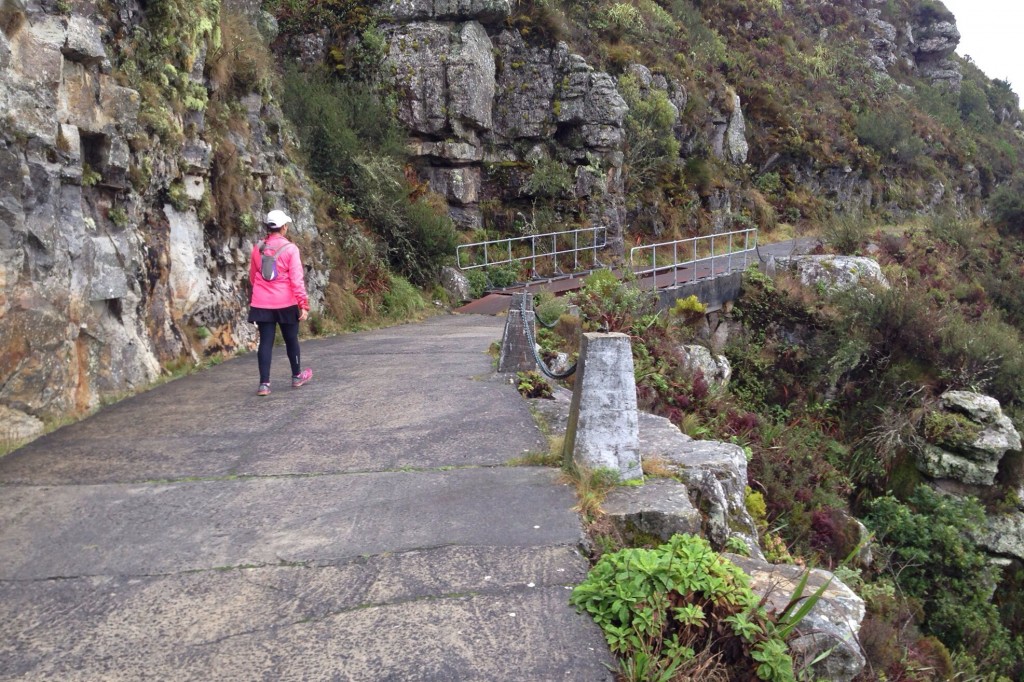 It’s easier to breathe once you reach the small bridge

As you run on the flattened top of Table Mountain, you will see the De Villiers Dam on the left and the Overseers cottage on the right. 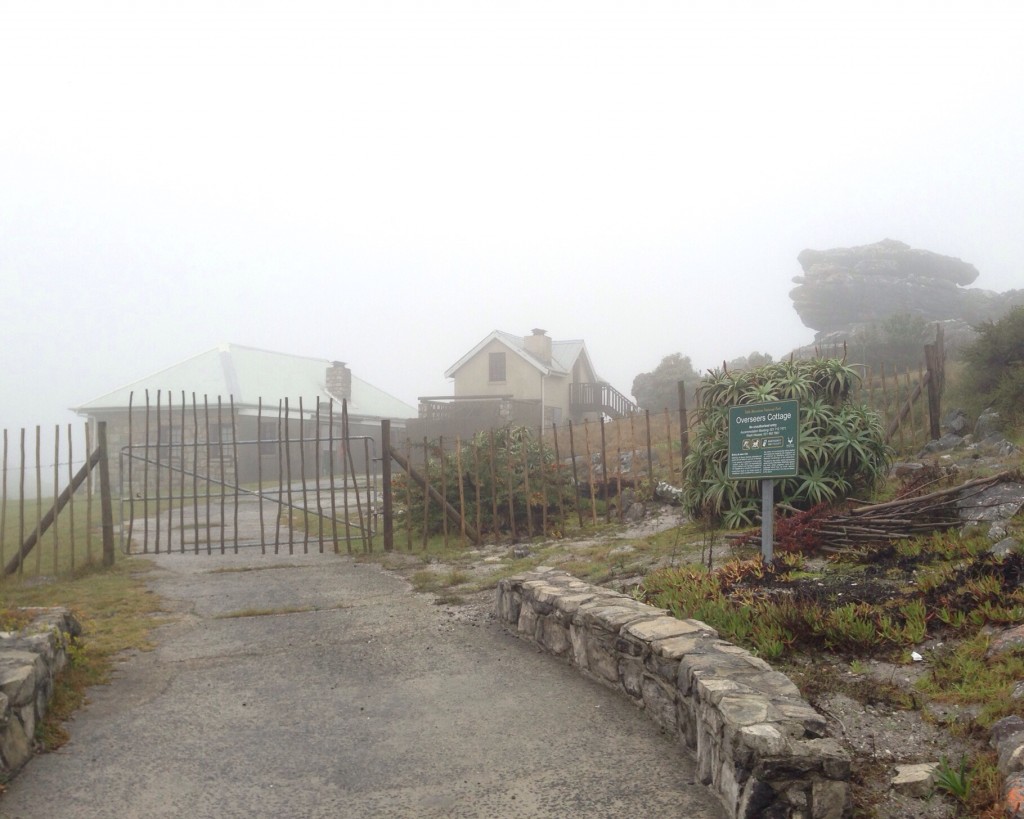 The Overseers Cottage shrouded in mist

Interestingly, you can actually rent the Overseers Cottage if you are looking for some accommodation with a difference.

About 100m after the cottage, we took some single track which creates a loop past the dams and back along the jeep track. 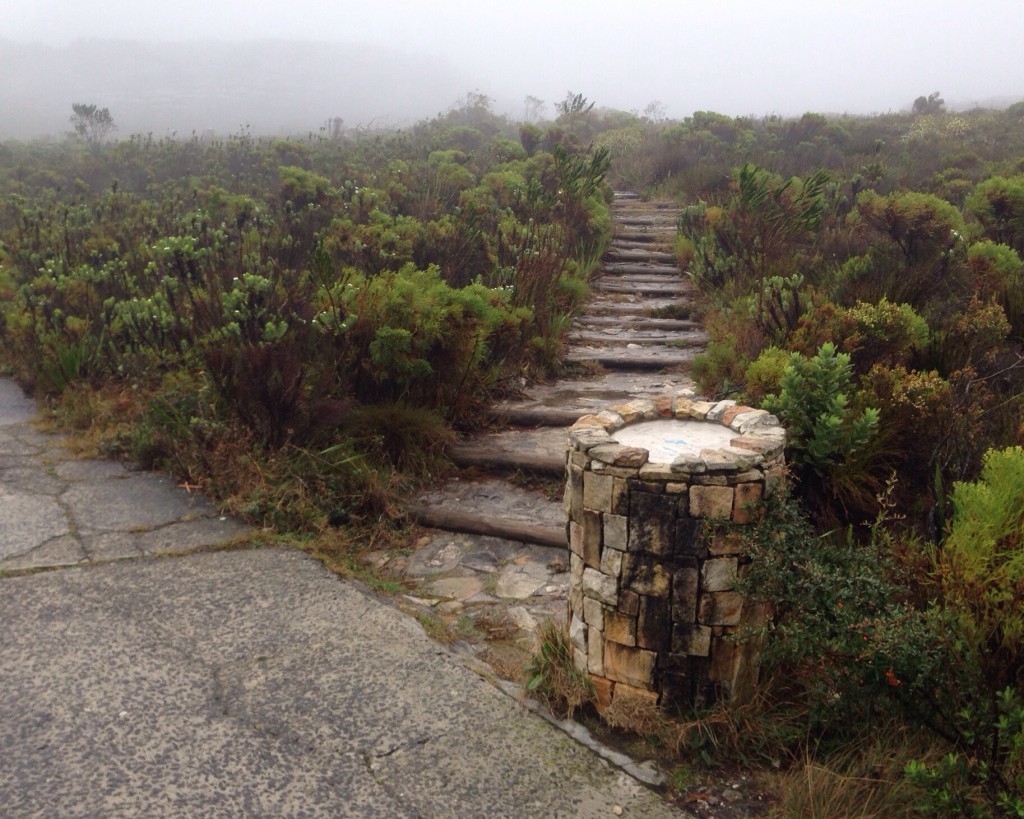 The single track path veers off to the right 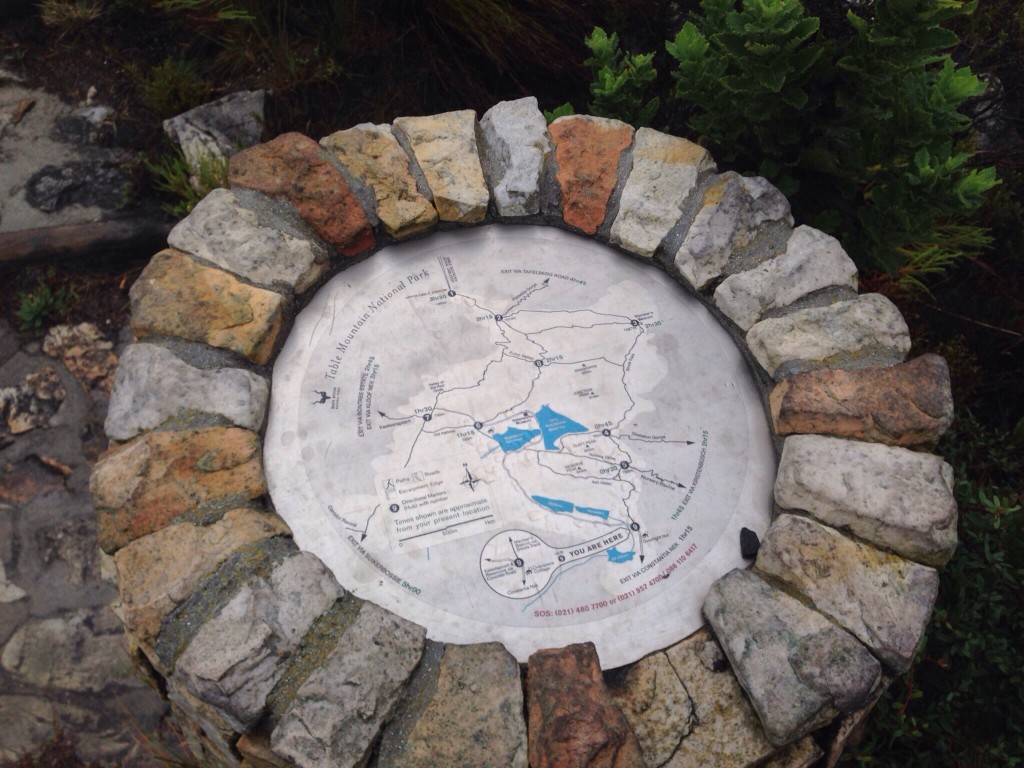 A handy map in case you take a wrong turn

Although it is a bit technical, the single track was a lot of fun. A word of caution – the first time I went up with the lads, it was a quick run. This time however, it was raining and those easy trails became a bit trickier. 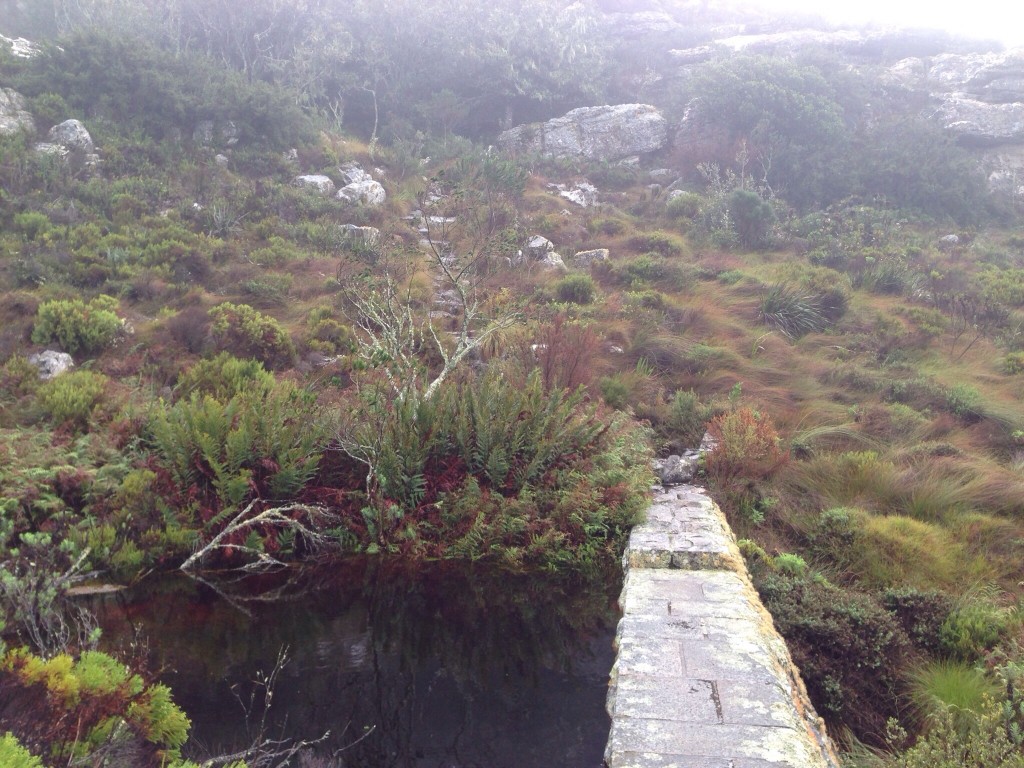 Believe it or not there is a path over there 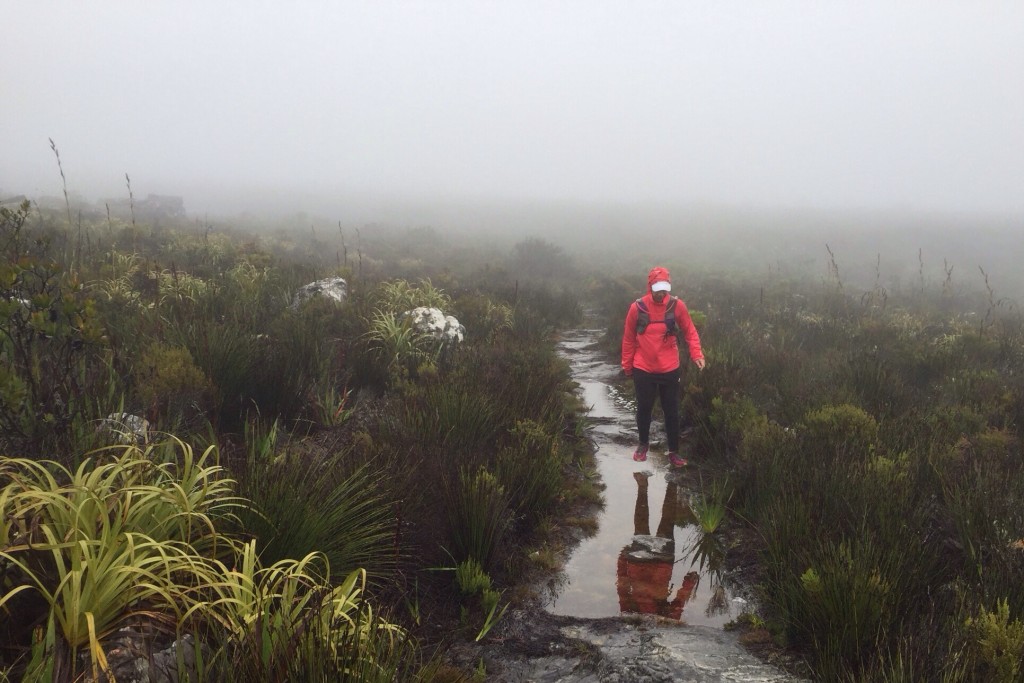 Splashing around in the puddles 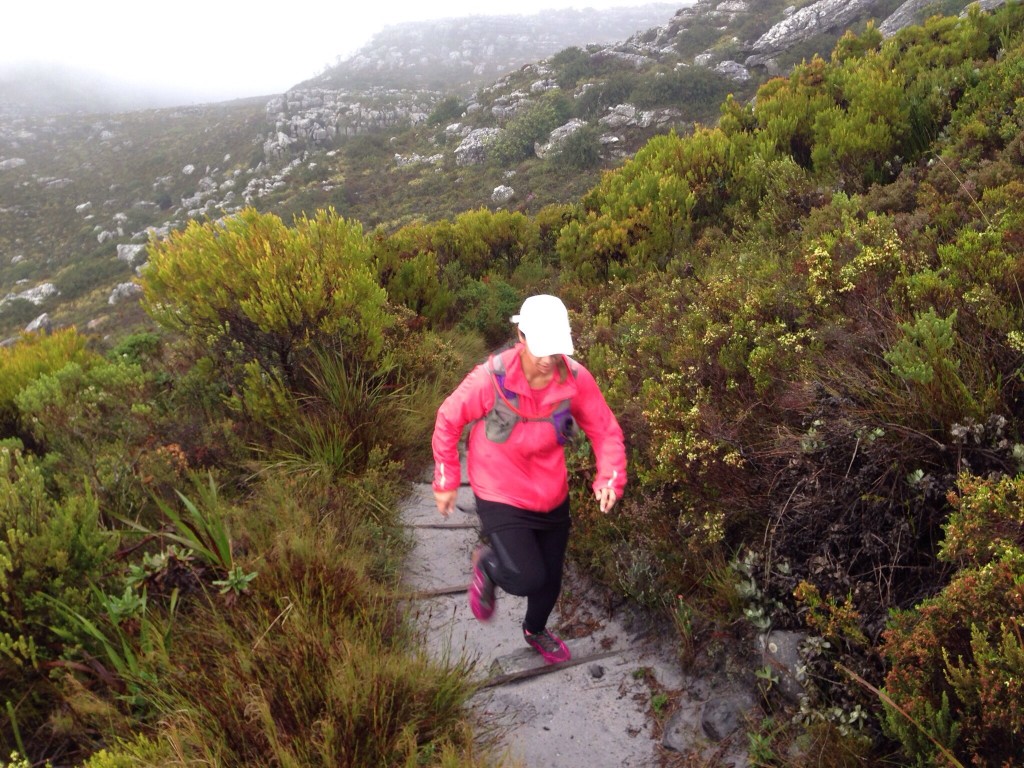 Charging up the dry paths

Trail running in winter is awesome. Not only is the temperature cooler (so you can run at any time of the day), but the weather can change quickly and throw some new elements into the mix. We started this run with some cloud cover, found rain by the time we hit the single track, and when we finally emerged at the Hely Hutchinson Dam the mist was so thick that you couldn’t even see the dam walls from 20m away. 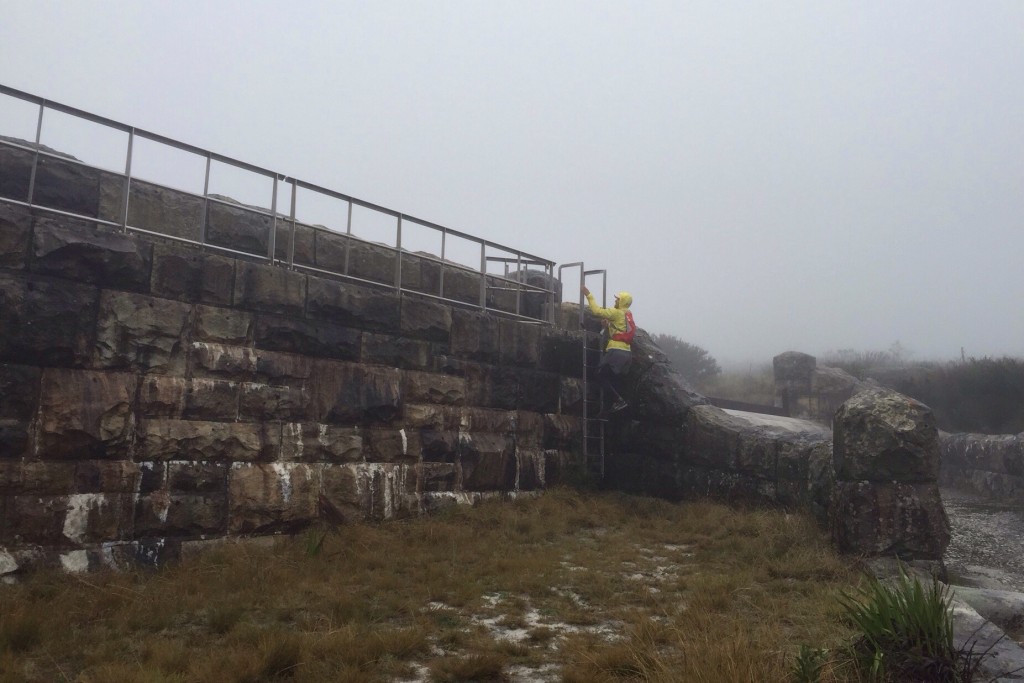 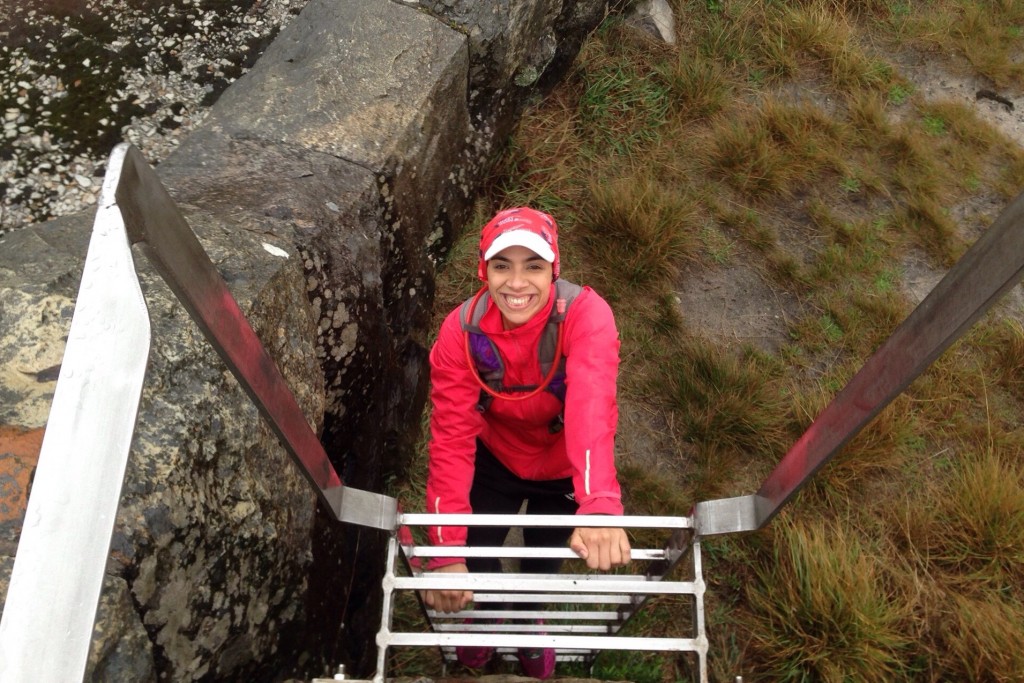 Big smiles, because running in the rain is fun!

We climbed the ladder to the top of the dam wall and ran across the top. There are great photo ops here so make sure you are ready to pull out some poses 🙂 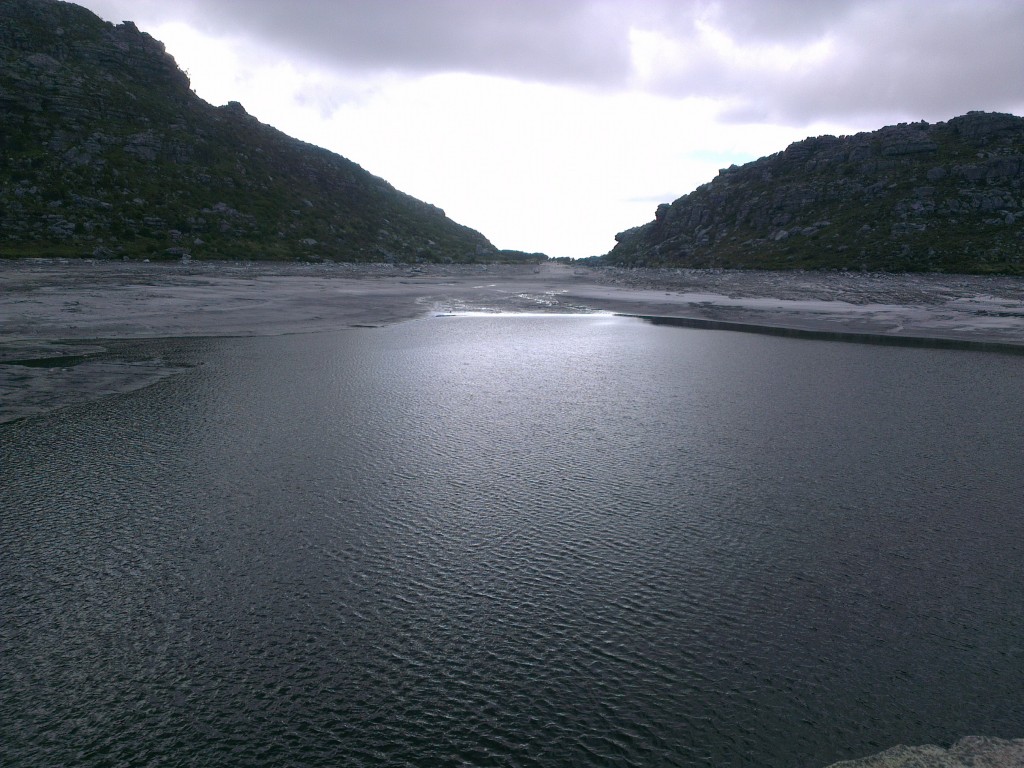 We took a snack break at the Waterworks Museum before continuing along the route – salted peanuts and raisins FTW! 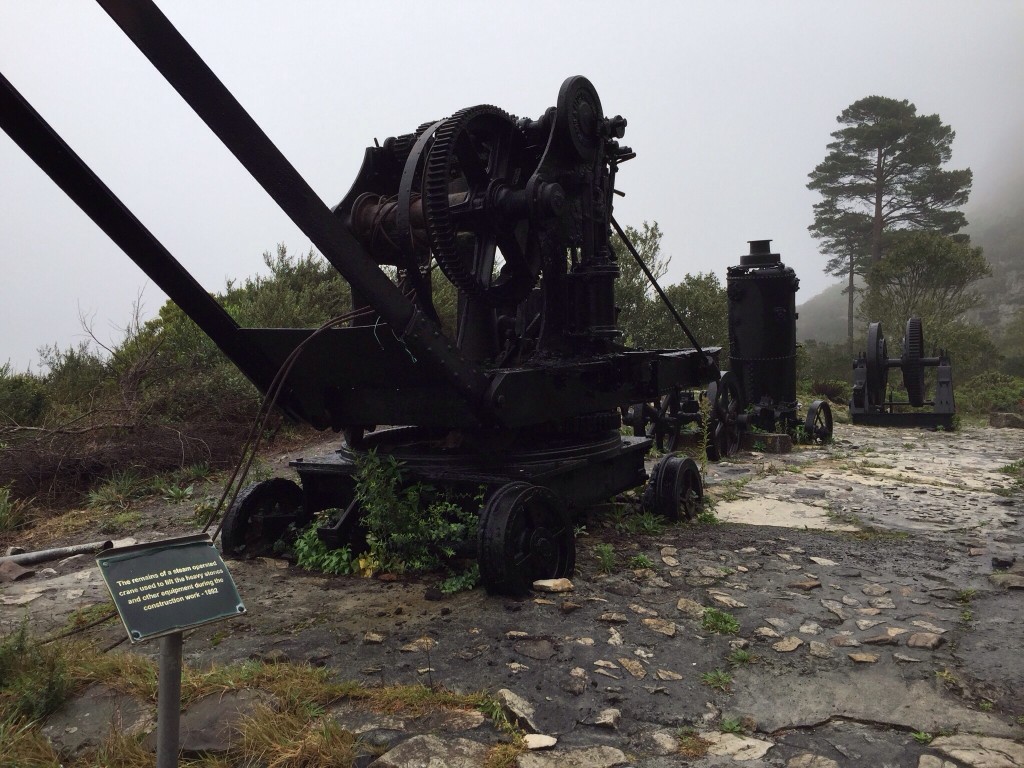 Remains of the cranes that were used to build the reservoirs

After our snack at the Waterworks Museum, we retraced our steps along the jeep track beside the Hely Hutchinson Dam and followed the loop back to the Overseers Cottage. 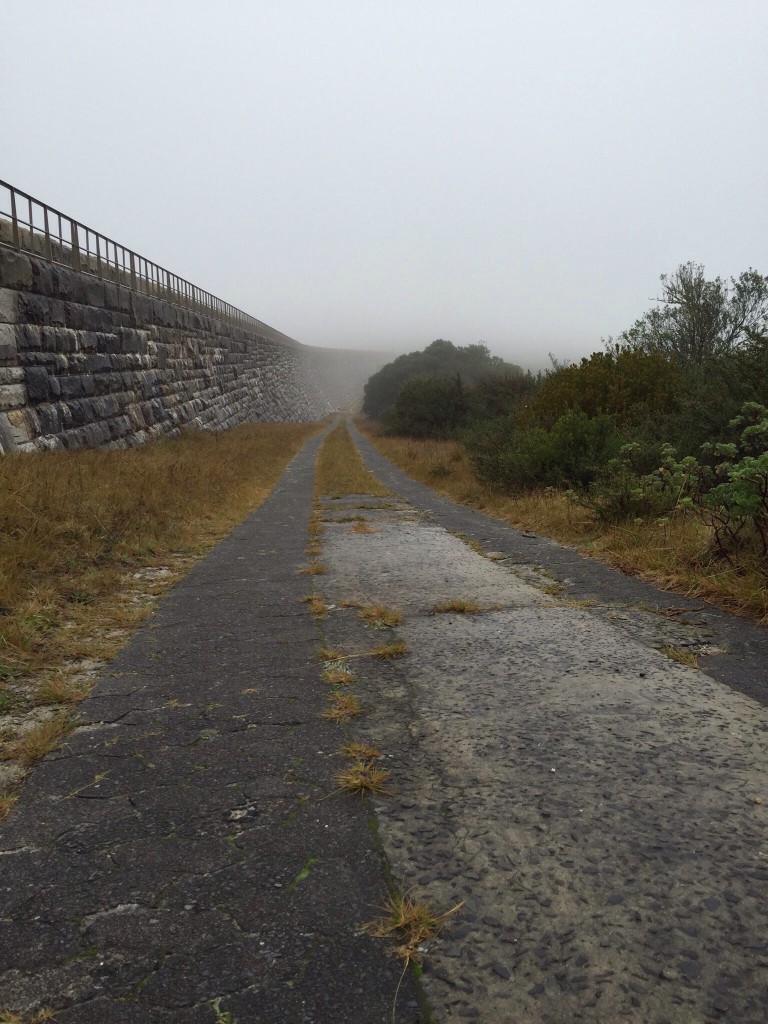 The track next to the dam wall 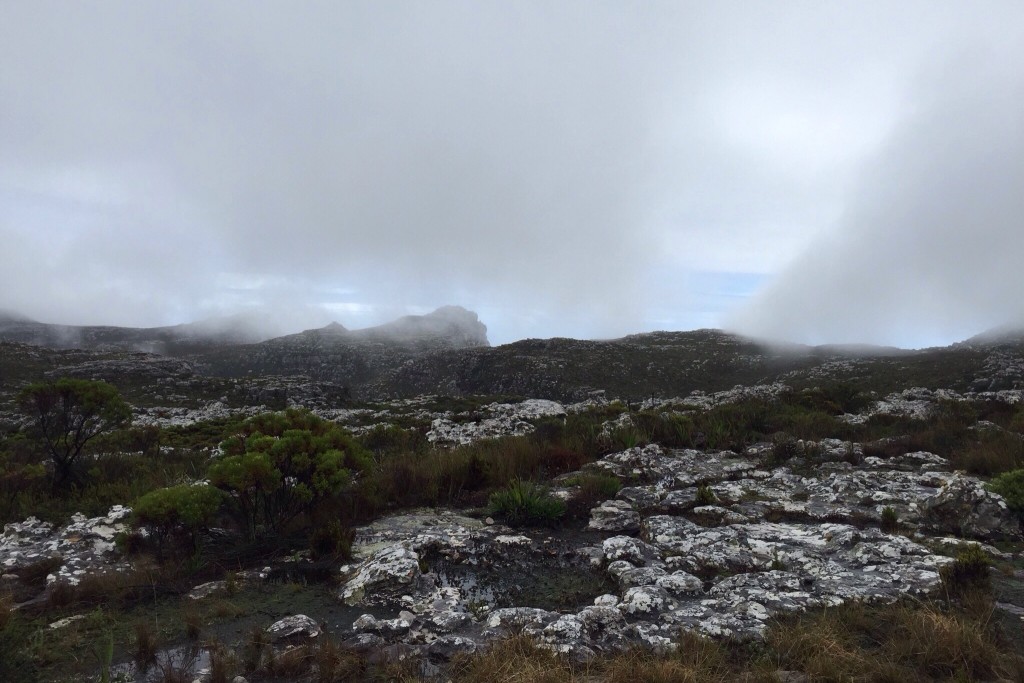 Epic views all around

The paved jeep track passes the Woodhead, Alexandria and Victoria dams before leading you back past the single track detour we took about a 100m from the cottage. 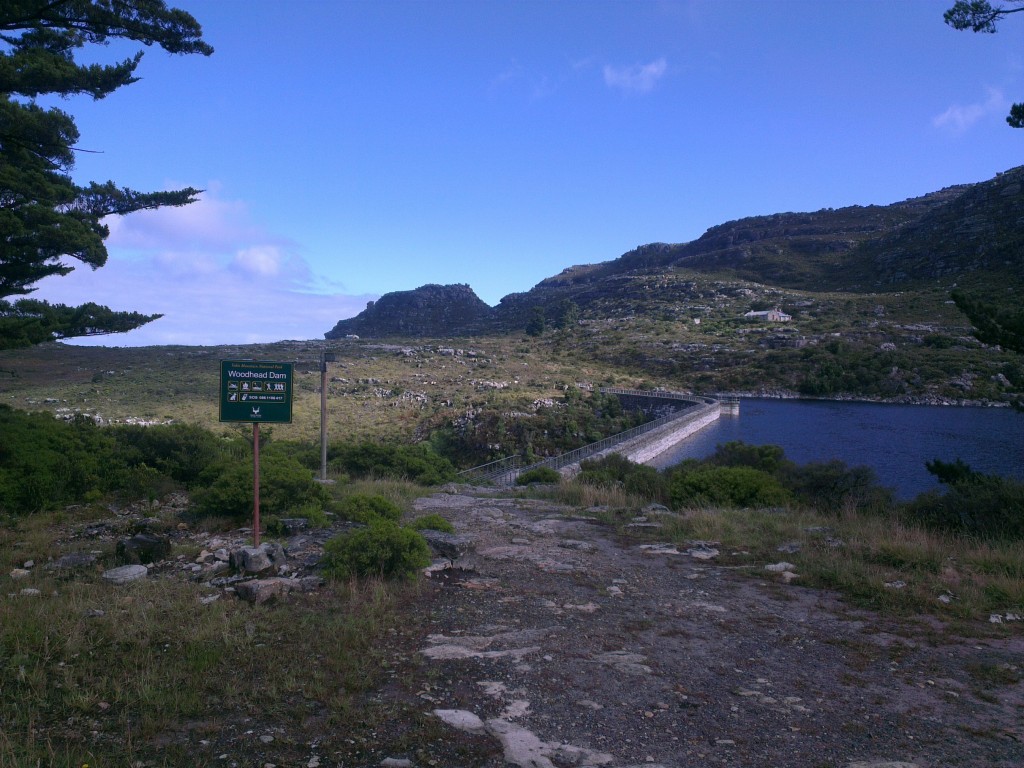 The winding route back is quite steep, but thankfully all downhill. You can choose to take the initial shortcut path which we started on (if you really need to get back to your car quickly). We preferred the gentler jeep track as our legs were feeling a bit of fatigue – the last thing you want is to go over on your ankle a couple of metres before the end 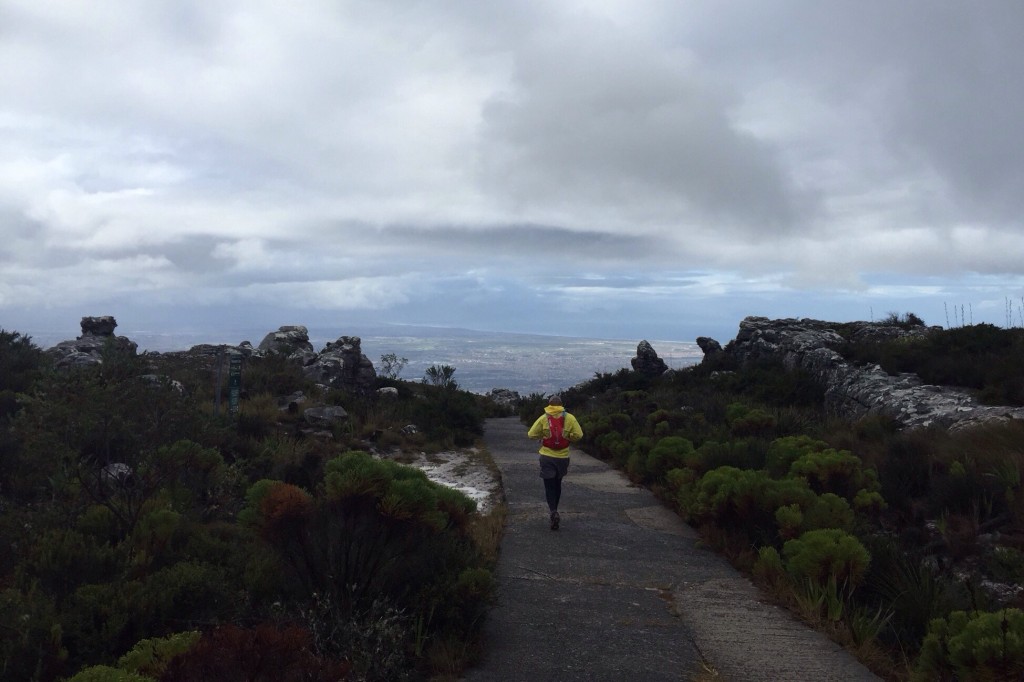 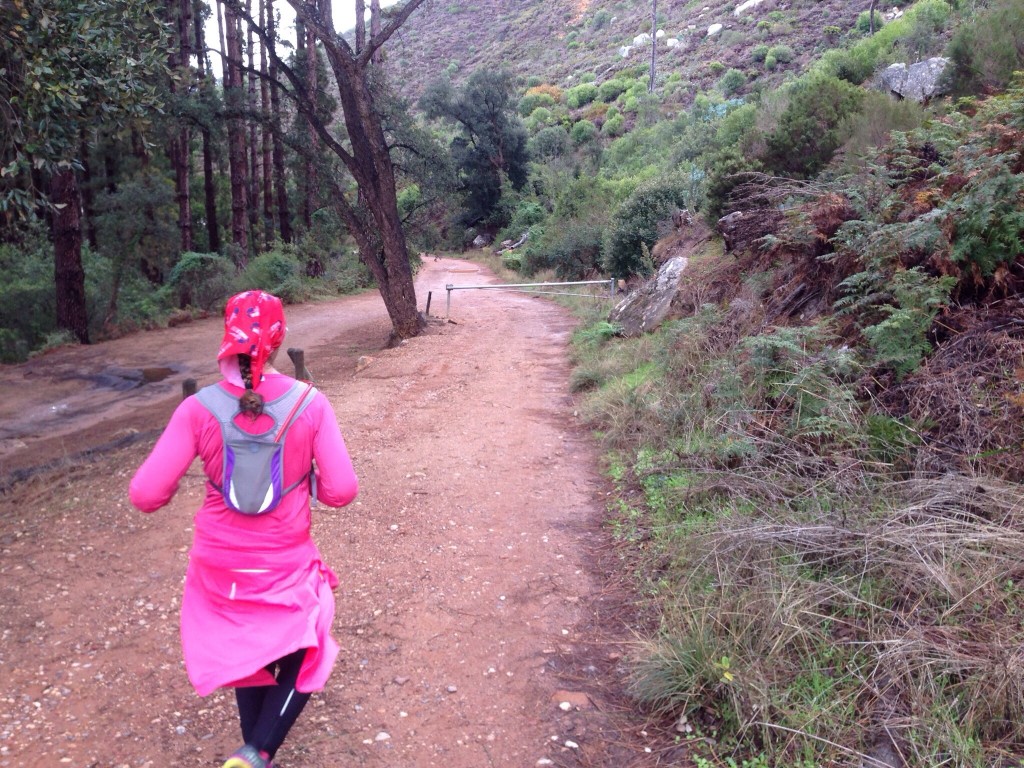 Keep right and don’t take the left turn towards Kirstenbosch

A nice beginner level out-and-back trail that’s about 14kms, with awesome views and a little bit of history thrown in for good measure. Not a bad way to spend a morning at all.

Some tips about the trail:

I think I won some brownie points with Aanikah for finally taking her on this route. I suppose I’m pretty lucky that my bokkie is… well… a Trail Bokkie 🙂 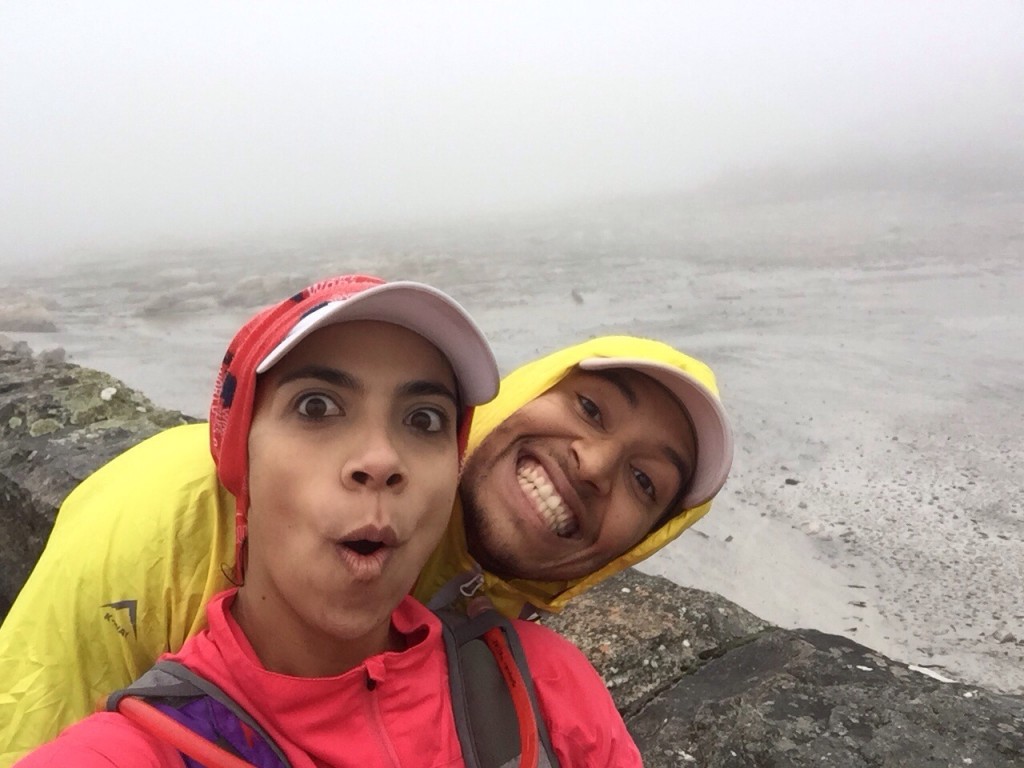