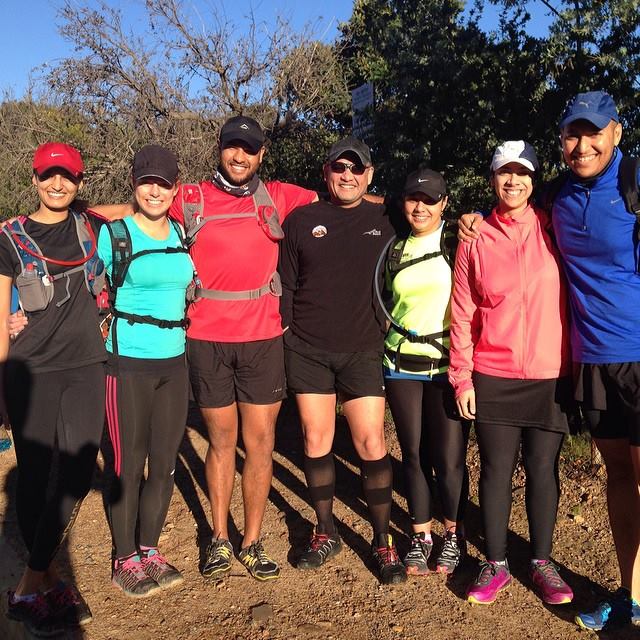 The newest members of the Trail Bokkies group (Aanikah and I) were out for our very first trail race – the inaugural Trail Du Mont Rochelle run. For the last couple of week’s we’ve been meeting up for a regular Wednesday evening 5km run in Newland’s Forest with the rest of the crew, but now it was time to take this show on the road!

The Trail Bokkies met up at the Engen on the N1 at 6:30am on Sunday 31st August 2014. After grabbing a couple of coffees, we were on our way heading to Franschoek to the park and ride facility set up by the event organizers. Joining us on the day was the famed TVR – Malikah’s trail running BFF who we were betting on bringing a podium finish for the Trail Bokkie team.

From the moment the bus driver asked us for directions to the race start, we knew that we were in for an interesting day!

After a short drive we arrived at the venue. A quick stop at the race registration desk to get our numbers pinned, some last minute “weight reduction” in the toilets and we were ready to roll.

The race had a staggered start with the 20km Long Route Runners heading out first. Fiekie, Malikah and TVR joined the 13km Short Route which followed. Rushdie, Nailah, Aanikah and I followed on the 8km Fun Run.

Now to call this race a “Fun Run” I automatically assumed that I would be in for a nice easy introduction to the world of trail running. Oh how wrong I was…

From the time the announcer sounded the start we were met with some epic terrain. The start had us following a path which was also the middle of a mountain stream – so wet socks and shoes were unavoidable. After about a 2kms we made it to the entrance of the Mont Rochelle Nature Reserve. This is where the true test began…

For the next 2kms it was tough going. The pace literally slowed to a halt as everyone walked up the trail to the view point. I promised Aanikah that we would run the entire race together and damn was I glad that she was there. I would be lying if the thought of quitting didn’t cross my mind. Thankfully, Aanikah was there to keep me motivated and encouraging me to take it one step at a time.

It was a slog, but eventually we made it to the Vista Viewpoint, which had some stunning views of the valleys below.

Aanikah and I at the Vista Viewpoint

As we took the last corner before heading back down the trail, we met Theunis Stofberg (one of the race photographers) ready to snap a pic. Now I’m not the most photogenic person, but I wasn’t going to let this guy immortalise the defeated look on my face. That’s when I decided to break out into a sprint and the results were not bad at all 🙂

The downhill was really exciting as suddenly the slow crawl up turned into a mad scramble. The promise of dirt, dust and wind through my hair could now be fulfilled. Aanikah and I even found some motivation (aka competitive behaviour) to really push it and ensure that we didn’t finish dead last by whizzing past some of the other entrants.

Finally after 1h and 32m, the jelly-legged duo of Aanikah and I crossed the finish line with smiles (barely!) on our faces.

Happiness as we crossed the finish line

What a great intro into the world of trail running – tough course, gorgeous views and awesome adventure! It was a punishing route and a hellova first trail race to take part in, but I will definitely be there next year on one of the longer routes.

Congrats to all the Trail Bokkies for completing their races. Next year we will be back stronger!

But first, let me take a selfie!

For more event information check out the website here