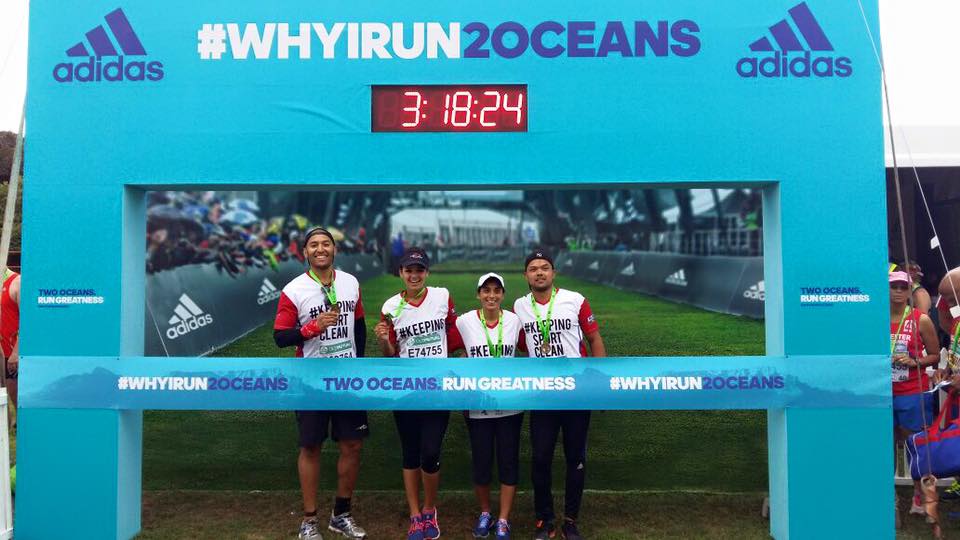 I know its Easter, but it felt like Labarang as the Two Oceans weekend had come around once more 🙂

And I wasn’t taking any chances either.

I’ve just returned from an ankle sprain and was put on a course of antibiotics thanks to a throat infection immediately after CT Cycle Tour. So in the last couple of weeks I’ve been bumping up the Vitamin C, washing my hands obsessively and trying to squeeze in a few training runs – nothing was going to keep me from joining in on the Two Oceans festivities

I would be repping the I Play Fair ZA team once more, but this time in two events – the 22km Trail Run and the 21km Half Marathon – my very own stage race 🙂

Both races had reputations for being tough. I am very familiar with the Half Marathon so I knew that doing back to back days would be the perfect opportunity to fly the I Play Fair flag and demonstrate the values of hard work and keeping sport clean.

The trail races would be run on Good Friday starting and ending at UCT. The 22km race set off first, with a field of SA’s top trail stars battling it out on the course – and then there was me, just trying to survive and finish before the start of the Nappy Dash 🙂

The route rises up from UCT, past Rhodes Memorial and then follows the Plumpudding track up to the King’s Blockhouse. The climb was tough, but thankfully a queue had formed at the base of Mowbray Ridge where there was some scrambling to do. This gave us time to catch our breath. 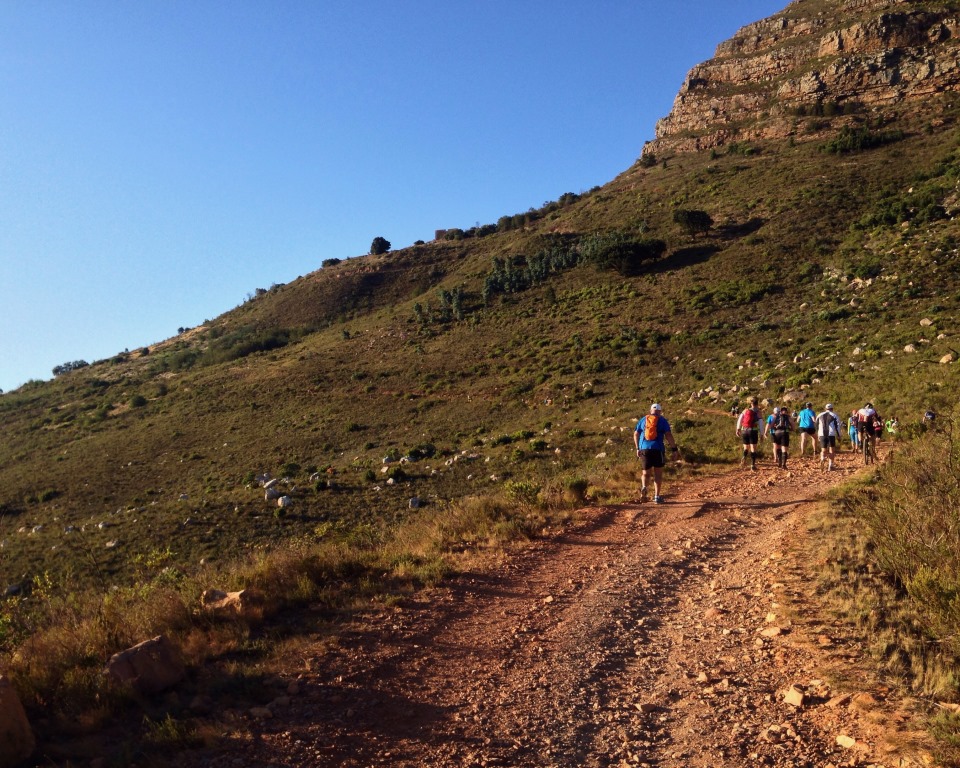 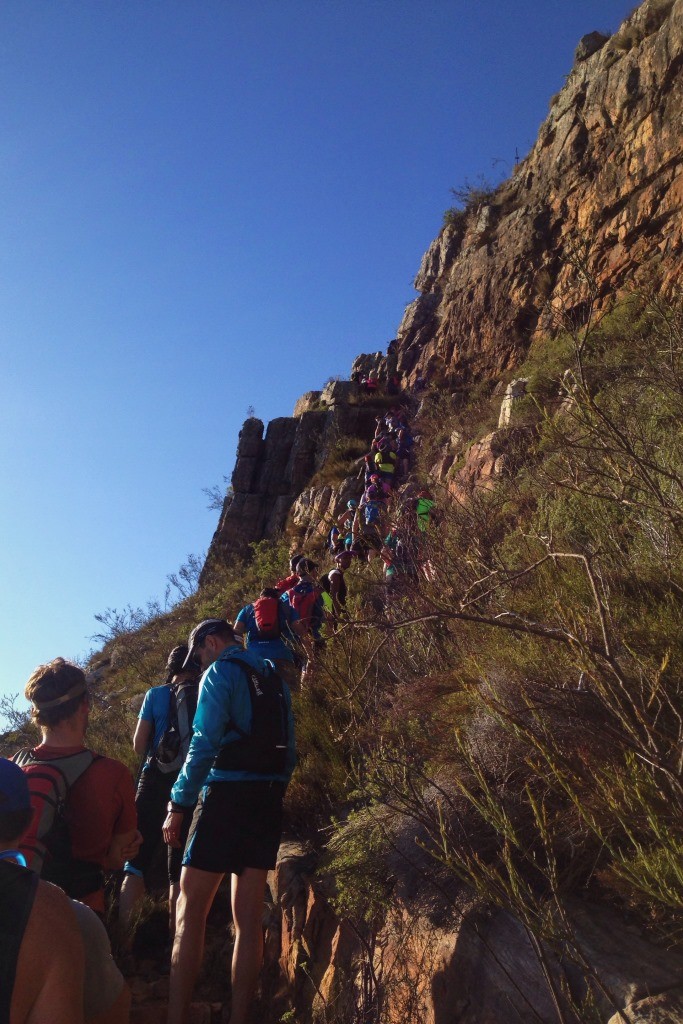 Queuing up to scramble

Once up Mowbray Ridge, it was along the Devil’s Peak Middle Traverse where the race continued all the way to the Saddle Route with some spectacular views of the CBD. We returned along the Contour Path to the Blockhouse, but by then I was starting to feel the effects of the tough mountain route as cramp threatened my calves. 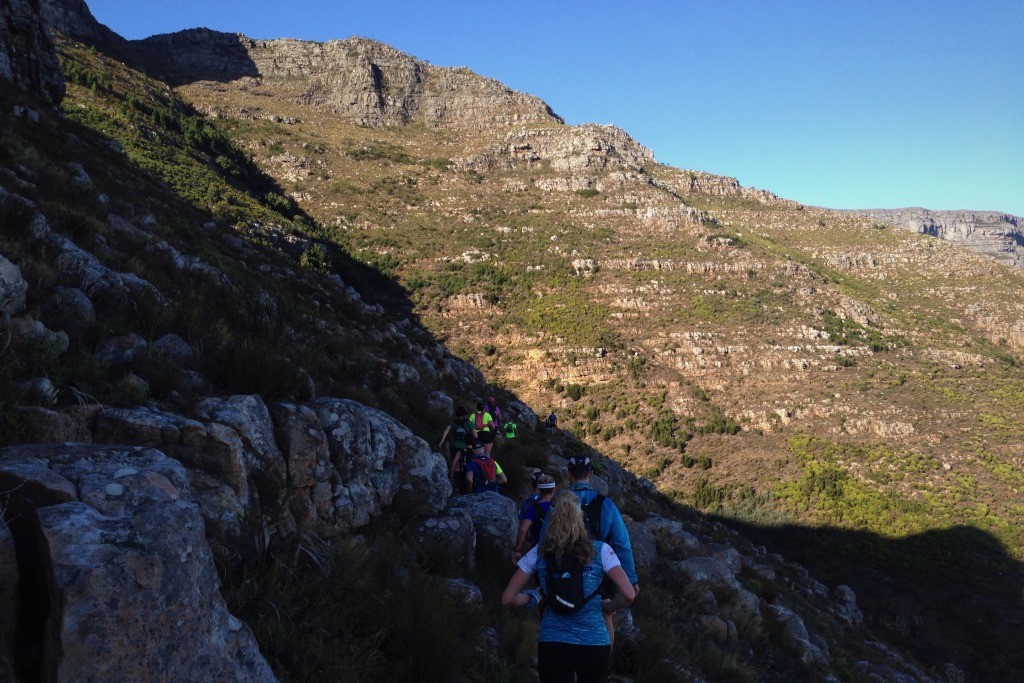 A drinks station appeared like an oasis just after the Blockhouse. That small caffeine boost from the Coke was exactly what I needed ahead of a tough second half in Newlands Forest.

Those sadistic event organisers went and found every tricky climb they could in Newlands Forest!

I was actually surprised that we managed to end lower than where we started because around every corner was (yes, you guessed it) another climb! I think I had a sense of humour failure somewhere along the Woodcutter’s Trail lol 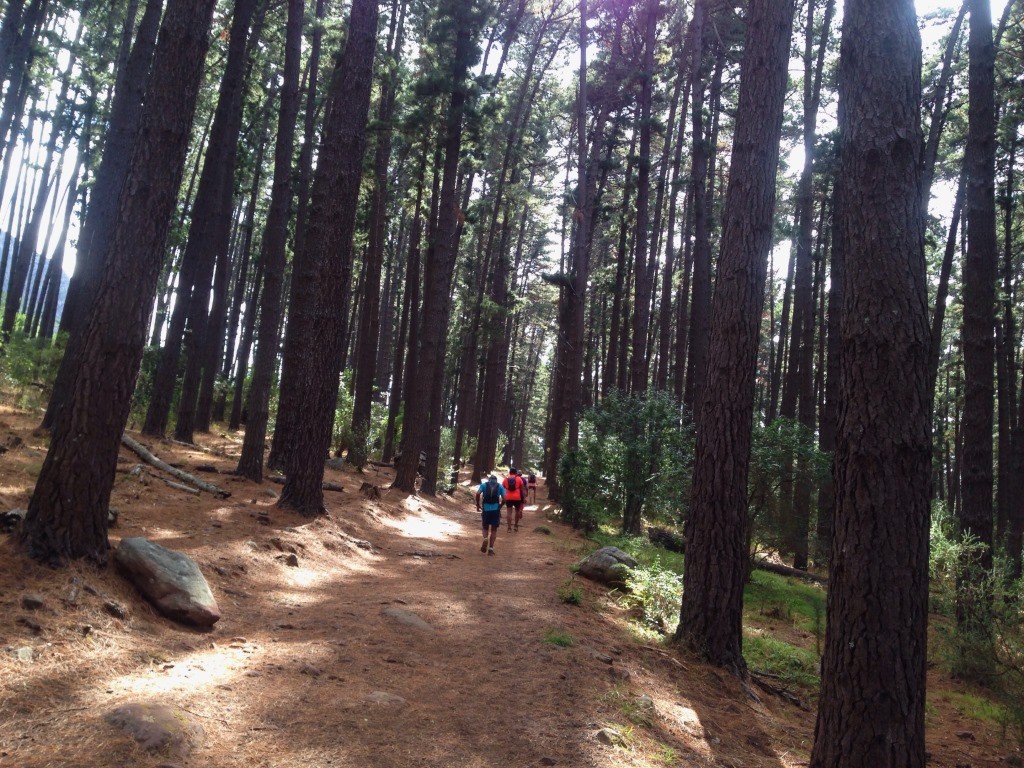 Thankfully, I emerged from the forest unscathed and crossed the finished line at UCT after running the final kilometre with both calves cramped up. 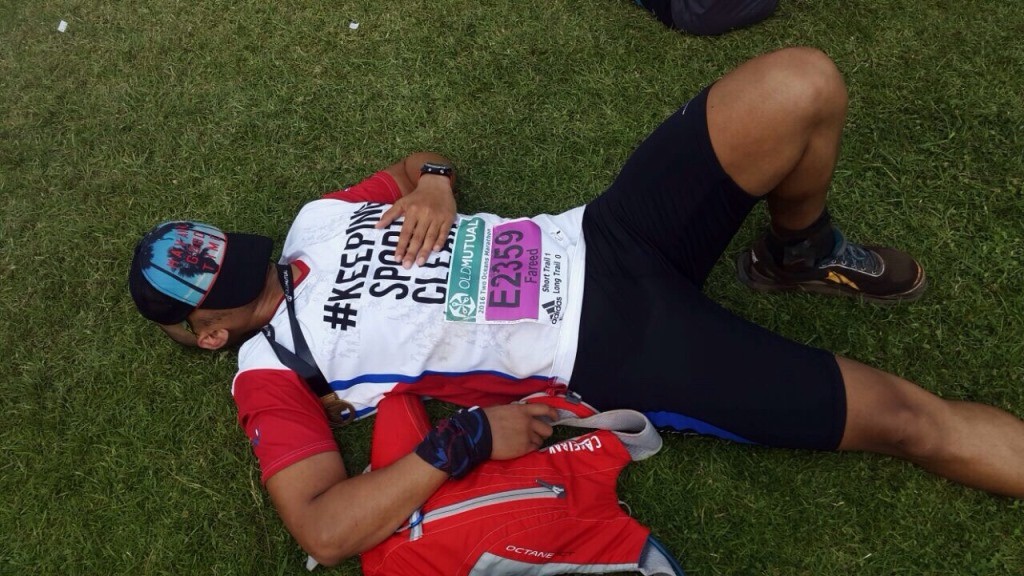 The rest of the day was all about eating and sleeping and trying to recover enough before the Half Marathon.

That 3:45am wake-up call was brutal, but an early start is important if you want to miss traffic on route to the race.

Temperatures hit 32°C the day before, but we’d woken to rain and an expected high of 20°C – proper Cape Town weather.

My plan was just to run chilled and easy and forget about time. My sore calves, hamstrings and glutes reminded me of that as I lined up at the start of the Half Marathon.

Somehow, I found my way close to the front of the start chute which is a first as I’m usually at the back waiting about 2 minutes before crossing the start line. Then all of a sudden we were over Edinburgh Drive and comfortably running down the M3 – where the heck did all of this space come from?

The Two Oceans Half Marathon is notorious for its traffic before, during and after the event. Miraculously, I’d found space and was going way faster than I’d expected – plus the cooler weather was helping out marvelously

That’s when that little voice in my head said, “My bru, I know you are broken, but if we run smartly, we could actually do a decent time”

So I decided to stash the camera, forget about selfies and just run. This will explain the lack of in-race photos 🙂

Possible strategies went through my head and I settled on targeting specific spots on the course to walk. One of them being Southern Cross Drive and the other was Chet’s Hill at the start of the M3 just after Kirstenbosch.

And I managed to stick to it, except for the one other short walk somewhere between Hohenort and the top gate at Kirstenbosch.

As usual, the crowds and gees all along the way was fantastic. You just can’t help but get sucked into the whole vibe that is the Two Oceans Half Marathon. As soon as my feet hit the finishing strait on the UCT Rugby Fields, a last squeeze of energy carried me over for a PB of 2:16:22 – not bad considering the beating I’d taken the day before.

It was a rough two days for me, but it was worth my missions of raising awareness to tackle doping in sport and also (on a personal note) prove to myself that I could take on the tough routes and survive – even get a PB! 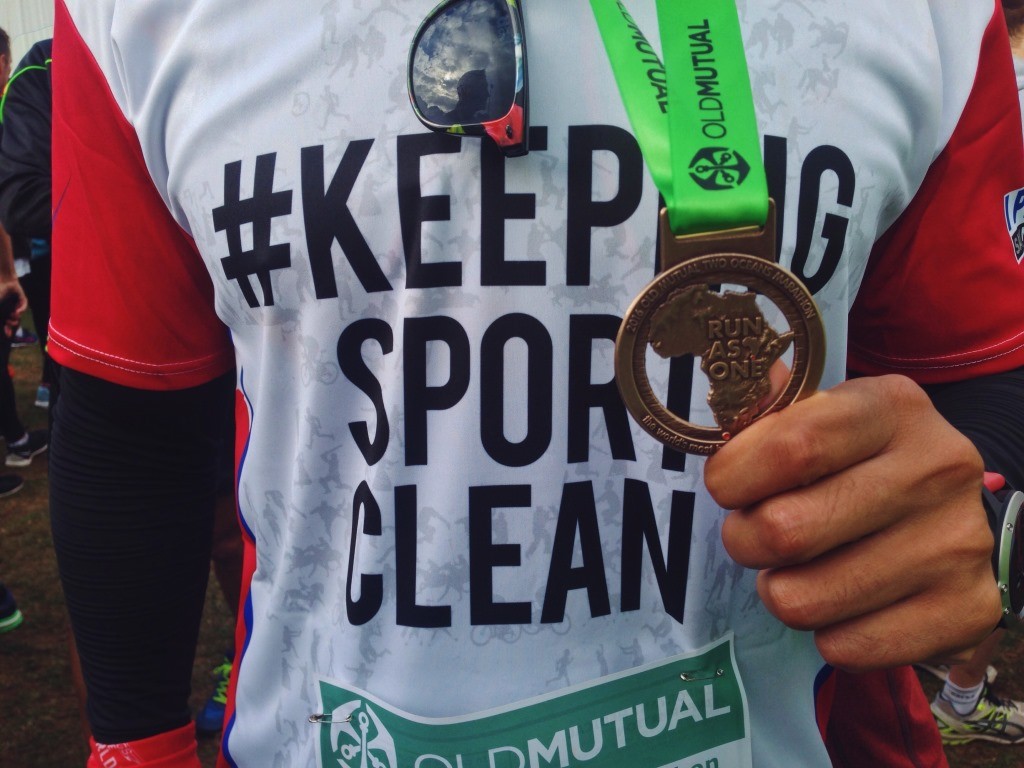 The spirit of Run As One shone through each event that I witnessed that weekend. From parents beaming while running with their toddlers, to speedy runners stopping in their tracks to check if other’s were okay. I saw strangers helping each other over the finish line and first-time runners finishing distances that they never thought possible… it was amazing!

A massive shout-out goes to my wife Aanikah, who crossed the finished line in the 56km Ultra Marathon displaying some next-level bad-assery. 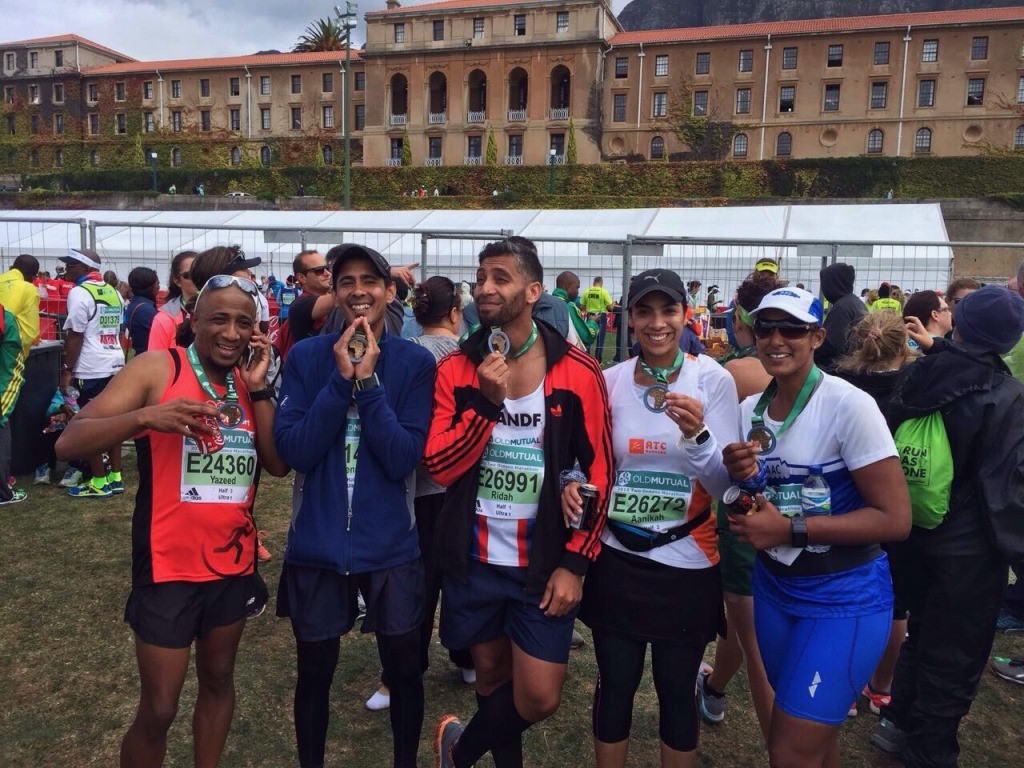 Did you join in on any of the races or festivities during the 2016 Two Oceans weekend? Feel free to share your experiences in the comments below.

Also, go ahead and like the I Play Fair initiative’s Facebook page and pledge your support to this worthy cause